How Shatner Saved The Genies! 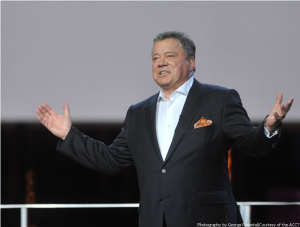 Great news for the Genies!Â  Last night’s telecast was watched by almost 500,000 thousand Canadians.Â  That number might seem small but, according to a CBC press release, that audience was more than the past seven years….COMBINED!!!

Uhh….what?Â  Seven years combined was less than 500,000? That seems insane, no?Â  I’m no mathematician but yikes, but that’s an average of about 70,000 viewers a year.Â  Okay, I lied, I totally googled that math question.Â  Yet another example of why I’m glad the internet wasn’t around twenty years ago!

So why the increase in viewership?Â  I’m guessing the fact that some people had actually heard of the movies nominated (hello Oscars!), there was practially zero competition last night (compared to most Thursdays) and dare I say William Shatner?Â  Can he really be the reason why the show saw such a dramatic increase in viewers?Â  If so, doesn’t that sort of terrify you?

Either way, it looks like the Genies still have some life in them yet!Â  Who knew?