How do you solve a problem like “Tarp Nazis”? 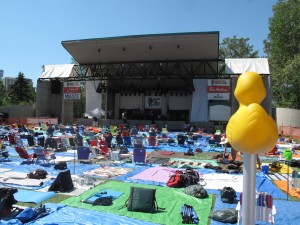 Does the term Tarp Nazis exist at other Folk Festivals? Â Because if they do, I think that Calgary can be called the commander and chief of the festival die-hards.

Admitedly, I haven’t been to a lot of four day music festivals, so I don’t really know how to compare the Calgary Folk Music Festival to others, but when I see people lining up at 8pm to get in the next morning, I know that something isn’t right.

If you’ve never seen this tarp phenomemon, what happens is this: Â People line up at all hours of the night waiting for the gates to open, once they do, they run to the mainstage with tarps, coolers, blankets and place-markers in hand. Â These “nazis” then claim their 6×7 foot patch of land and begin to set up shop. 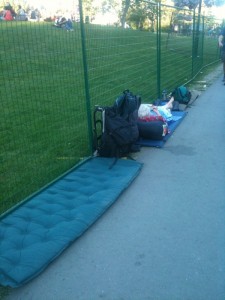 This sounds all fine and dandy, but the system becomes horribly flawed. First you have people in the first fifty or so rows that are really excited about maybe one artist, that means they spend the rest of the time wandering the grounds and can rarely be found on their actual tarp. Â If they are there, chances are they aren’t going to be paying attention. Â That is how you end up with a Swell-season incident.

Secondly, 6×7 feet is a LOT of space, especially when it might just be for one or two people. Â Just because you can have all the space, it certainly doesn’t mean you have to take it. Â If everyone is there to enjoy the music, why not let as many people enjoy it as possible? 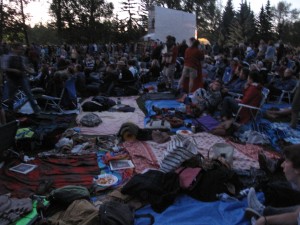 I was so desperate to see The Swell Season, that I walked up to a stranger with a huge amount of space to himself and asked if he would be willing to share. Â I know, very un-Canadian of me. Â Luckily, he was Canadian, grumbled something under his breath and then let me sit. J’aime Passive Aggressiveness!

But the Tarp Nazis are a Calgary tradition and if there is one city that is stubborn about their traditions, it is this one.

So how do you fix it? Actually, I think it is quite easy.

I think the first twenty feet of space in front of the stage should be reserved for the standing room only. Â That way, if you are die-hard enough, you most certainly deserve to stand there. Â Chances are the people in the standing-room only area will flow in and out depending on the artist. Â The musicians benefit from the set-up because they aren’t trying to perform to a certain pocket of fans stuck 75 feet away because of the maze of tarps.

The tarp-nazis won’t be pumped about it, but they can still get a good spot, just not the prime real-estate in front of the stage that they end up wasting anyway.

If the Calgary Folk Music Festival is really about celebrating the best in music, Canadian and otherwise, we should let real fans enjoy as much of the music as possible, even if they don’t sleep on the pavement.