Hollywood Parents: How to make a killing. 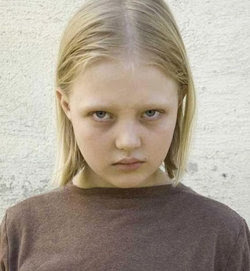 A couple weeks ago I wrote about my dismay towards parents taking their kids to R-rated movies. I thought it was childish and a cheap way of parents trying to get the â€œcool parentsâ€ label some of them so desperately seek.

I couldnâ€™t imagine anything more detrimental for a childâ€™s mental health than watching a bunch of teenage boys trying to get girls drunk and trying to sleep with them for laughsâ€¦.until last night.

Last night, as I sat crumpled up in my chair watching Rob Zombieâ€™s Halloween at Chinook it hit me, the only thing worse than a child watching an R-rated movie is a child being in an R-rated movie!

Without giving away to much, the new Halloween is basically a re-telling of John Carpenterâ€™s classic slasher film about a child who brutally murders his family only to come back 15 years later to take care of the one surviving member.

The movie starts off by exploring the 10-year-old mind of Michael Myers. In the newest version he is played by Daeg Faerch and let me tell you if this kid actor was in my family I would never ever invite him to a Christmas dinner at my house. Letâ€™s be honestly, Iâ€™ve always been a little wary of children, but this kid is almost as terrifying as his characterâ€™s actions.

During the scenes that I didnâ€™t have my eyes closed I kept imagining the casting session for the role of Michael Myers as a boy. Can you imagine the crazy parents pushing their kids to win this coveted role? â€œNow, honey I want you to really look like you want to stab your sister.â€ and â€œSweetie, if you want be in this movie, your going to have to know how to really slit someoneâ€™s throat, you canâ€™t just call it in.â€

Are parents really desperate for their kids to be famous that they are OK with them being â€œslaughteredâ€? My parents let me do a cheesy government commercial when I was a child and I still blame it for most of my problems. I think parents who want their kids to be in movies that are so beyond graphic need to seriously look at the cost of fame. I mean Macauley Culkin was never in a gorefest and he still grew up pretty messed up. And donâ€™t even get me started on Lindsay Lohan, although Herbie Fully Loaded was pretty terrifying.

Iâ€™m going to do my best to Google the names of these actors sometime over the next 15 years, I canâ€™t wait to see how they turn out. Until then I guess Iâ€™ll just have to keep my eyes on the kids of Storybook Theatre, there has got to be some juicy over sexed tween gossip there.