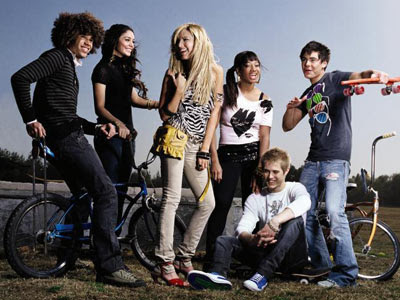 Earlier this week I mentioned how I had watched both High School Musical one and two in succesion this past weekend and that it was a long story.
Turns out it wasn’t that long. My fake-roommate is obsessed with all thing HSM and insisted that since I made her watch Veronica Mars that she would make me watch Disney’s lucrative products.
I’m going to be honest and say that I didn’t really ever think about turning her down. I had been so curious about this franchise because you’d have to be living under a rock to not have noticed High School Musical has been everywhere over the past year. I wanted to know what all the fuss was about!
So last Friday, Sarah and I sat down each with a 6 pack of beer and an extra large pizza and, as 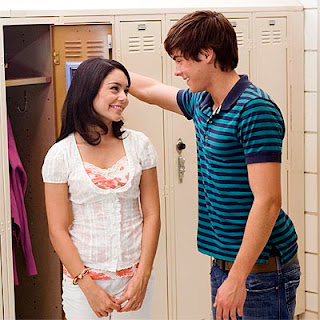 Sarah put it distubingly: “Got our Zac Efron on.”
Literally within the first 5 minutes of the movie I looked over at an already drunk Sarah and said: “Is this just Grease for a new generation?”
She replied: “Maybe, but it’s awesome.” As pizza tumbled out of her mouth.
I knew right then and there I was in trouble. But it turned out to be pretty harmless. Was it the most amazing thing I had ever seen? No. Was it as bad as that Cavemen show that is going to be on ABC this fall? Not really. But I didn’t really get what all the fuss about. Were the 12 songs that were song really worthy of a 40-city sold out tour?!? Oh and did you know Zac Efron does even really sing on the first movie!?!? Broke.Sarah’s. Heart.
After the first movie wrapped up, we turned the DVD off and switched to TIVO which had taped the premiere of HSM2 (to an audience of 17.2 million!)
The second movie was essentially like those episodes of Saved by the Bell when they all worked together at that beach club. (Remember how they always came up with clever ways to bring Mr. Belding into the mix? Ahh Lisa Turtle)
Anyway, I found the songs in HSM2 a little better than the first movie. And that is why a week later I still cannot get them out of my head! I’m pretty sure The Music in Me” could be used as a form of torture and if you never watch High School Musical but are forced to watch one song from it make sure it is Efron’s “Bet On It”. I honestly swear to you there is nothing funnier than that 4 minute song. Nothing. Seinfeld be damned. It has never been more clear of a cheorographer having an absolute hate-on for someone than the dance moves “Bet On it!” I can’t find them on YouTube, but I ASSURE you it is worth sitting through one the million reruns Disney will air of HSM2
Lingering Questions:
-Why is Monique Coleman even in these movies? The background actors got more stuff to do than she did.
-Have you ever seen the pop-up version of High School Musical? Hilarious
-Why does Efron’s character say thathe hates singing, but he’ll always break out into a song
-Isn’t it weird that Corbin Bleu sings “I don’t dance” but is the best dancer in the whole group and that he always gets dance solos?
-Why do I care that I have lingering questions? 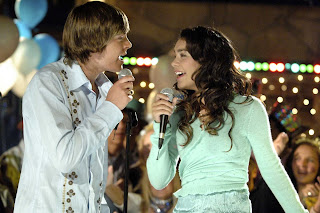