Heroes is back, but do you care? 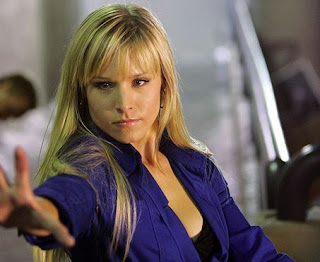 So I had grand ambitions to write a review of the new season premiere of Heroes. The one problem? I had not idea what the hell it was about? I mean it was great to see that show that we hadn’t seen since last December but pretty much everyone we thought was dead came back, or did they? Honestly, I’m so perplexed. I think I will have to take couple of days to think about it and get back to you.

But did all you Veronica Mars fans notice the split-second mini cast reunion? It was a blink and you missed it moment but it was nearly perfection.

Kristen Bell (Elle) obviously played Veronica Mars and Francis Capra played the prisoner Jesse Murphy, who was saying he was the real Peter Petrelli. Capra of course played Veronica Mar’s go-to leader of the PCHers Weevil. The two were reunited for but a split second after she went kaboom…..but like everyone else, did not die. Like I said, it was perfection.

What did you think of the premiere? Do you think the show is back on track? How many more powers do you think they can come up with? Did you see that guy that has the power of “sound manipulation”? Is that the lamest power ever? Why is Mrs. Petrelli such a whore? So many questions!