I bought Google’s Pixelbook 24 hours ago and I have...

After nearly 5,000 blog posts, this may the first one not written on an Apple computer. And you know what, it’s weird.

Yesterday, I started a new journey and that journey is that of a Pixelbook user.Â  Ever since I first started buying laptops, say 12 or 13 years ago, I had always owned Apple computers.Â  They were great, I loved them, until I didn’t.

So after reading every possible review out there, and after a lot of debating, I decided to take the plunge and switch from Apple’s Macbook Air to Google’s first Pixelbook. (I still can’t believe I bought the first generation of anything!)

I posted a story on my Instagram page exploring the first few minutes of owning a Pixelbook and got quite a few asks for more detailed thoughts, so here we are, 24 hours after I first opened the box, and I have some things to say.

First things first, I want to make certain that you know that this is not a sponsored post. Some bloggers have made it confusing to tell when it is, and when it isn’t. You’ll always know with me, but just to be really certain: this is not.Â Â

I’m by no means a tech writer. I don’t know what GB means, and the only kind of ram I know is the animal. But, I do use a computer every day, all day, like most people, so I wanted to share my experience as a normal person. So there’s no technical jargon here.

Well, almost.Â  The first few minutes with the new Pixelbook scared me. My entire career is my computer and all of a sudden, I didn’t know how to copy and paste text. I was terrified. I was worried that my growing annoyance with Apple had led me down the wrong path and I started regretting my decision.Â  But, I decided to stick with it. If I drove the same car for 12 years and then just suddenly switched, I’d probably be a bit stressed. But just because it’s different and a bit harder, doesn’t mean I made the wrong choice. In the past few hours, I’ve watched a few YouTube videos that addressed many of my concerns, and more importantly, the things I’ll grow to love about it.

I love the feeling of the keyboard.Â  It feels classy and easy. I do not like the clicking of the touchpad. It feels heavy and cheap. I’m hoping that’s something I get used to. I’ve been using the Google Pixelbook Pen a bit more than I thought it would, mostly avoid having to hear that clunky plastic-y sounding click.

Edit: Almost instantly after I posted this, someone pointed out that I actually don’t have to click on the touchpad, just a gentle tap will do the trick. They should call it a tap pad.

Speaking of the pen

It’s annoying that it costs extra ($129), because it makes the Pixelbook so much more enjoyable. I’ve never much been into using a stylus or even a tablet, but already I’m enjoying people able to use a touch screen or use the pen to screen grab something using the pen. It makes me feel like Penny on Inspector Gadget. So while it’s silly that the pen isn’t included in the computer, I’d suggest getting it so you can enjoy the full Pixelbook experience.

One of the features I was looking forward to the most was being able to download Android apps and use them on my desktop. Now I’m able to upload photos on Instagram, or download shows on Netflix to my laptop, which has already proven to be really handy.Â  I’m excited to be able to edit photos on Snapseed, instead of on a smaller phone screen.

Do I need a tablet? 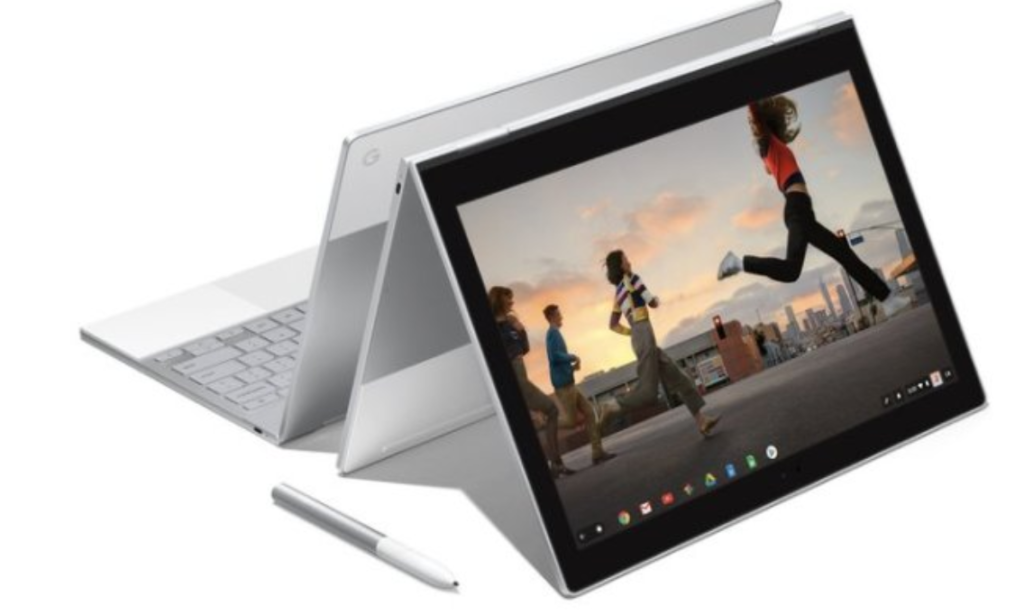 Besides using it as laptop, you can also convert the Pixelbook into a tablet and whatever it’s called when you basically make it look like a tent so you can watch a movie on a plane.Â  I haven’t really felt the need to use either of those features yet.Â  As I already mentioned, I’ve never been much a tablet person anyway, so I’m interested to see if I start using it, now that I have one.

It’s nice to be wanted

This one is a bit hard to explain, because both Apple and Google are billion dollar companies and I don’t think they really are focused on the individual experience, but in a way, it sorta feels like Google actually does.Â  For the past year or so, I’ve been talking about ditching my iphone for the pixel and then wondered aloud if I should ditch my macbook air for the pixelbook. Sometimes I tag Google or use an Apple hashtag, and the only one that has never gotten back to me was Google.

I don’t know why specifically, but I sorta find that annoying. Having someone use social media talk with your customers is a part of modern marketing and if I’m being honest, it just seemed like Google wanted it more. And as a customer, it’s nice to be wanted. Sure Apple is the number one company in the world, but no business can succeed forever if they don’t appreciate their customers.

What do I miss?

Honestly, not much. But I definitely miss iMessage. I know there’s other messaging apps, but none work as seamless as iMessage. So for now, my boyfriend (who only uses Apple products) will have to find a new way to message each other. Over the past couple of years, I’ve been switching all of my things over to apps like Google Drive, Docs, Sheets and photos and now I can’t imagine running my business without them. They just make life so much easier, so the fact that I have a computer that integrates with them and my Pixel 2 is super exciting.

Right now, I’m still learning a lot about this computer.Â  But I’m really excited about it. Especially as I learn more and of the features, especially with the bonus of having Google Assistant built right into it!