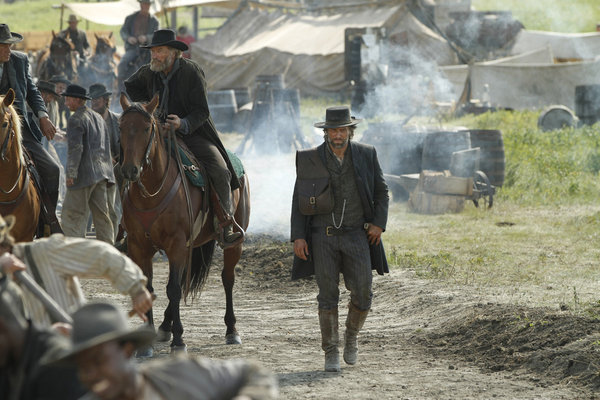 Good news for those in work in the Alberta film industry!

AMC has officially renewed Hell on Wheels, which is filmed on the outskirts of Calgary, for a second season.

The show wrapped up it’s first season this past weekend with about 3.8 millions viewers, making it AMC’s second highest rated series behind The Walking Dead. Â Yup, Hell on Wheels really does rake in the ratings, especially when compared to award favourite Mad Men. The ratings for the series were high from the start, thanks to being on after The Walking Dead, but for the second half of its season, Hell on Wheels was on its own, and for the show to only dip to the three million range is really impressive!

Truth be told, I was a little nervous about Hell on Wheels because there was hardly any buzz for the show, and we’ve all seen networks, with shows that have okay ratings, get canned because people simply weren’t talking about it.

Hell on Wheels tells the story of a Confederate soldier who works on the railroad while taking revenge on the Union Soldiers who raped and killed his wife. It stars Anson Mount, Common and Colm Meaney. Besides the film industry being excited, I know that a lot of Calgarians will be pumped to have the cast back in our city filming the show. Last year was fun because you just never knew when you were going to see Common or Mount strollin’ the aisles of the farmers market!

Fans of the show can likely expect new episodes later this year.