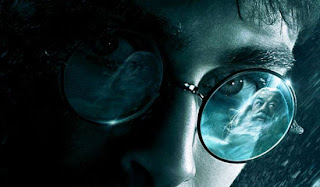 So, as I said a couple days ago, I am a loser. Oh, and also that I like Harry Potter. I wasn’t planning on going to the midnight showing of the film, but then I thought: it’s time to get off the Internet, Colin.

We (myself and two friends – I didn’t go alone, obvs!) ended up at a theatre in the suburbs around 10pm, armed with a bag of home-popped popcorn, three Starbucks drinks, a bag of lightly salted Old Dutch chips, one Kit-Kat, two Snickers, a bag of Fuzzy Peaches and a hell of a lot of attitude. And there we stood. For an hour and a half. Yeah, my life is awesome.

There was something I’d forgotten about midnight showings: they’re annoying. The nightclub-like “I’m cutting!” lineup, the caffeine-fuelled pre-teens, the endless chatter and giggling… it was like dexedrine hour in Romper Room.

And let’s not forget the constant attempts at one-upmanship of witty comments during the previews, which made the whole thing like a contest to see who will be the first to pull a total George Costanza.

(Full disclosure: After the new Twilight preview, during which people CHEERED, I turned to my friend and said, “Seriously, what the hell is Twilight?” because I Am A Comedian).

Let’s talk about the movie. I’ll try my best not to give too much away, I promise.

Overall, it was pretty good. They managed to highlight the important aspects of the plot and most of the humour, and – notably – kept the whole thing going at a good pace. It did not feel like a 2.5 hour movie. My only complaints are (and I promise not to spoil anything, so keep reading): 1. They re-introduce some characters from the past books for a few moments, only to have them disappear from the film without wrapping up their mini-plots. I realize that things will all come together in the end, but it sort of felt a bit lazy. 2. Voldemort remains woefully underdeveloped as a character. He is the main villain – the antithesis of Harry – and yet, even in a film that was suppposed to reveal much about his past and his motivations, we are still left wondering just what the hell is this guy’s deal?

Oh, and there’s a lot of awkward teen love moments in this one, too. All I can say is, I hope you like cheese. As we’ve established, I’m a cynic, so my eyes were planted firmly skyward for a few scenes.

Finally, the most important scene in the book (you know what I’m talking about) was done well, I thought. They almost lost the whole thing to the most thundering cliche for friendship or something stupid like that, but they pulled it back from the brink just in time. And then followed up with a totally sobering still-shot.

I like rating things, so without any frame of reference, I’ll give this 7.5 Sorting Hats out of 10.