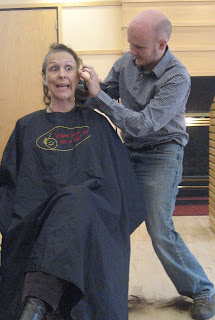 I’m bald. No secret there. No one really bugs me about it and by now most people only know old me as Bald Michael, which I am learning ain’t such a bad thing.

That is why I’m so happy that, as of today, two of my co-workers joined me in the world of cheap shampoo and sunscreen all over. But in their case it was all done in the name of cancer research. What made there day even more special for me that due to a random series of events I ended being the one to shave Lisa’s hair.

Apparently I was considered some sort of expert because I do my own hair each and every weekend. I was initially really nervous about cutting some one else’s hair but the anxiety soon melted away to some weird hybrid of therapeutic pleasure. It was nothing against Lisa but more about that amazing feeling of shaving someone’s hair. I don’t know how many of you have ever done it but it felt so so so good. I get chills just thinking about it

Anyway, it just goes to show that you’ll never know where you ‘ll day will end up going. 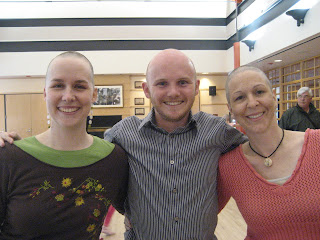