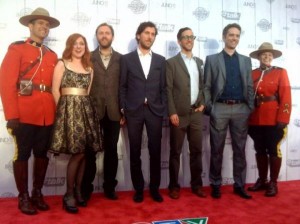 When the Junos took over St. John’s a couple of weeks ago, all everyone could talk about was Justin Bieber and Michael Buble. Â But it turns out a lot more people were interested in the Great Lake Swimmers!

The folk rock band performed at the Junos and if you ask me, they pretty much stole the show and music buyers obviously agreed. Â After the awards show, Â sales for their latest album (Lost Channels) jumped a fantastic 63%. Â Their single “Pulling on a Line” skyrocketed an AMAZING 244%!!!!

Those in the industry are calling it “The Juno Effect” and while a lot of the performers experienced sales bumps, the numbers for GLS are especially impressive considering how unknown they still are. Â But with numbers like that, it is only a matter of time until they reach Bieber-like fame. (Hopefully.)