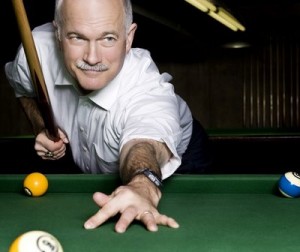 The story of Jack Layton’s death, has brought together this country more than anything else in recent memory.

I’m not really going to get into politics, mostly because mine are always changing, but I’ve always admired Jack Layton more than any other politician. In life and I think now, more than ever, in death. He was a fighter, he was always the underdog and he knew it. But that never stopped him from fighting, for those who had been neglected, forgotten or mistreated, he was an example of why you should never give up, never stop fighting.Â  His ability to speak to teens, seniors and everyone in between with an equal amount of respect is something that I will never forget.

Many Canadians look at Pierre Trudeau as a shining example of Canadian politics, and I think Mr. Layton will soon find himself shone in the same light.Â  Although he never made it to 24 Sussex Drive, it didn’t matter.Â  He was a leader to so many, including me.

For being the reason that so many young people voted in elections and became interested in politics, Jack Layton will be sorely missed and wonderfully remembered.