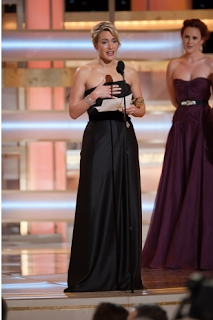 So once we got past the treacherory of d-listed celebs that was Golden Globes Red Carpet, I settled in to catch the actual awards. There were some surprises and some much deserved winners. And as with anything that involves Hollywood, some lingering questions.

Most Satisfying: Kate Winslet picks up two golden globes for two different movies (The Reader, Revolutionary Road). If there is a more perfect actress out there, I haven’t seen her. What makes this better is that Winslet seems to be a really nice person. A really nice and funny person. Here’s hoping these awards mean that the 5 time Oscar nominee won’t be going home empty handed this year.

Most Frustrating: How can Tom Wilkenson‘s Benjamin Franklin be nominated in the same category Neil Patrick Harris’ Barney Stinson. The Best Supporting actor category needs to be split up between dramas and comedies. It doesn’t make sense that these two very different genres are competing against eachother. Neil Patrick Harris is brilliant on How I Met Your Mother and deserves his turn on the stage. The Foreign Press needs to fix sooner rather than later. Although I can’t help but wonder if Bejamin Franklin himself has his own bro-code.

Most surprsing: Anna Paquin winning best actress for True Blood. Look I’m all about supporting Canadian talent (and vampires for that matter), but Paquin over my second mother Sally Field (Brothers & Sisters)? Well that’s just something I can’t support. Canadian vampire or not.

Most (and still) baffeling: Tell me again how LOST wasn’t even nominated for Best Drama. True Blood really? At least it didn’t win, that honor went to In Treatment. Never heard of it? Don’t worry, only 446,000 watched the show when it first debut back in January 08. It was HBO’s lowest Monday night premiere EVER.

Most convincing: Alright, alright. I’ll go and see Slumdog Millionaire! Jeez, you don’t have to be so pushy.