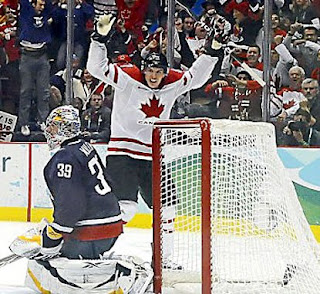 Where were you yesterday when Sidney Crosby scored?

Apparently most of you were in front of your TV. CTV just released the ratings numbers for the gold medal hockey game and people, they are huge!
How huge? 16.6 Million people watched the Canada beat the USA. You don’t need me to tell you that it has become the most-watched television broadcast in Canadian History!
What is #2 on the list? The series finale of You Can’t Do That On Television.
Nah, just joking. Although that was pretty sweet too. It was actually the Closing Ceremonies, they were watched by 14.3 million people. None of whom are happy that Nickelback were there.
So my question is, if you weren’t watching the game, what were you doing?