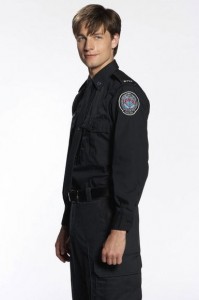 I owe Global’s Rookie Blue an apology. A couple of weeks ago, I reviewed it and then essentially dismissed it. Since then, the show has surprisingly turned into one of the biggest hits of the summer. Better yet, it is even doing amazing rating in the USA!

Not that I have to apologize because the show is a hit, but because after watching the first three episodes, it definitely is growing on me. Is it as gripping as Grey’s Anatomy or House? Â No, but they weren’t either in their first seasons. Â And Rookie Blue seems to well on its way to a second season.

And that is mostly thanks to the fans. Â When it debuted two weeks ago, the Toronto-filmed series garnered 1.8 million viewers in Canada. Â This number would be shocking if it was airing in the normal TV season, the fact that it debuted in the summer with those numbers is almost unheard of! Â The next week, they slipped to 1.4 million. Â But considering the episode aired on Canada Day, Global must be beyond ecstaticÂ with the ratings so far!

So have you watch Rookie Blue yet? Â What do you think?