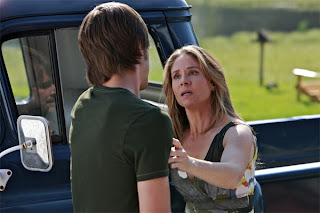 I think the CBC is mad at me. For months, maybe years, they have been asking me to watch an episode of their popular show Heartland. But to date, I have ignored their requests, mostly because it has always seemed like a hybrid of Full-House and The Horse Whisperer. Not exactly my cup of tea. It was too neat and clean for me.
But this week, I finally decided to give the show a shot. I think mostly because it features Canadian icon, Megan Follows!!! That’s right, Anne of Green Gables herself!
Fellows plays Ty’s estranged mother and the second she comes on the Heartland ranch, you know it’s not going to end well. We’ve all seen the newly reformed mother shtick before. But as I viewer, I had a little more faith because of Megan.
The episode also has some fun and light story lines involving Michelle Morgan‘s Lou competing in a jam competition against some competitive grannies, and Jessica Amlee‘s Mallory learning the value of money.
But the episode has an amazing last 5 minutes. I actually got goosebumps. Even as a new viewer to the show I was shocked, I can only imagine what loyal-fans will think!
I didn’t think I would ever write this but: I can’t wait for next week’s Heartland.
If you want to catch up with Heartland, you can watch full episodes online.
In case you are wondering, the show’s last song is Serena Ryder‘s Stumbling Over You.