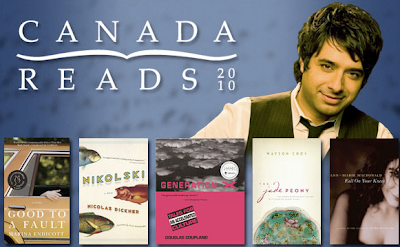 Last week, CBC announced the newest season of Canada Reads. But for all intents and purposes it might as well have been named Canada minus Mike Reads.
I used to be such a good reader. I mean I could devour a Goosebumps in an afternoon. But then the Internet was invented and books fell by the wayside. It’s not like I stopped reading all together, I think I once read Carrie. And then in the last year, I’ve read both of Chelsea Handler‘s books, but I don’t think that really counts.
Shockingly, the contest will proceed, regardless of my lack of reading. This year the five books up for debate are:
All five of these books are available and would make awesome Christmas gifts! If you get them now, readers will have loads of time to read them before the national debates on March 8 to 12, 2010, on CBC Radio One.
During the debates, celebrity panelists will defend a work of Canadian fiction of their choice. One by one, the books are voted off until one prevails. The winning title will be announced nationally on Friday, March 12, 2010.
So you want them for yourself or as gift for someone else!
I’m giving an entire set of the five books away!
Technically speaking, this could be five gifts!
If you want to win them, all you have to do is email me the name of one of the celebrity debaters!
Check out the Canada Reads website for your answer!
Email me (mikesbloggityblog@gmail.com) by Tuesday, December 15th at 11:59pm/mst.
You must be Canadian and you must not have won with Mike’s Bloggity Blog before!
Good luck!
Don’t forget, I’m giving away great Christmas Gifts all week long!!!