Getting hooked on fishing for the first time ever!

I have to be honest about something.Â  Iâ€™ve been going on a lot of adventures lately, but mostly theyâ€™ve been things Iâ€™ve been thinking about doing for a while anyway, so I like to think of them as convenient adventures.Â  But fishing isnâ€™t something that I hadnâ€™t ever really thought about doing. I know, I know, being from New Brunswick might mean that I grew up fishing, but I think that was every New Brunswicker but me.

But Iâ€™d been hearing about Get Hooked Fishing Adventures for a while and was told that if I were ever going to learn how to fish, it should be with Keith.Â  So, after thinking about it for a while, I realized: â€œWhy not?â€Â  I mean, people have been doing it for millions of years, it must be fun, right?

But the truth is that the night before the fishing trip, I couldnâ€™t sleep.Â  I kept laying there thinking about the fact that I was actually going fishing. It wasnâ€™t that I wasnâ€™t excited, it was just that I had so many questions.Â  (Leave it to me to make what is known as one of the most relaxing sports stressful.)Â  So after tossing and turning for a few hours, I got up and wrote down all the things that my busy little brain was thinking about:

I had to get a fishing license today. What does it entitle me to do?

We donâ€™t need to talk about the bathroom thing too much, but I was arguably most nervous about that.Â  Assuming the fishing boat didnâ€™t have a bathroom, and not liking any of the alternatives, I stopped drinking really anything like half a day before the trip. But it wasnâ€™t just the bathroom stuff and once I wrote the list down, I realized that most of my nervous was actually fear of the unknown.Â  With all the skills one amasses in their life, none of mine had taught me how to fish. So, at the age of 32-years-old, I was learning something completely new. I didnâ€™t even know that would scare me. Â I think I also wanted to know that I would be good at fishing.Â  At my age, I have a general idea of what Iâ€™m good at and what Iâ€™m not.Â  I had no idea if I was going to be good at fishing.Â  I didnâ€™t know how someone could figure out if they were good at fishing or not, but I guess I was about to find out. 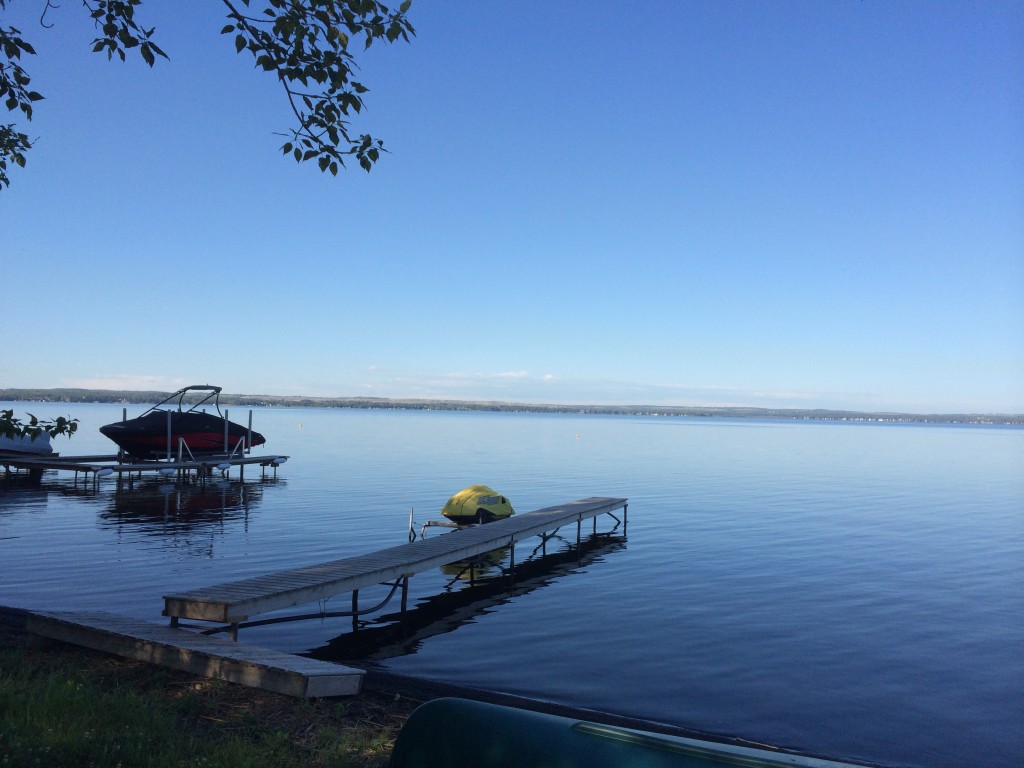 With the list written and my questions prepared, I was able to get a few hours of sleep and we met up with our guide first thing in the morning in the town of Stony Plain, just outside of Edmonton.Â  Keith has been operating Get Hooked Fishing Adventures for 20 years and it shows. By that I mean, he really was a professional. He called us the fishing virgins and was clearly excited to take a few newbies out on the lake. Considering about how many fishing virgins he must have across in his career and the fact that he was still excited about it, made me feel quite happy.

Before we had even made it to the lake, I had asked Keith most of my questions. Actually, I barely waited until the truck had started before I started listing of

f my questions, one by one. As probably any sane person would tell you, most of his answers were telling me not to worry about it, or weâ€™d figure that out when weâ€™d get there. 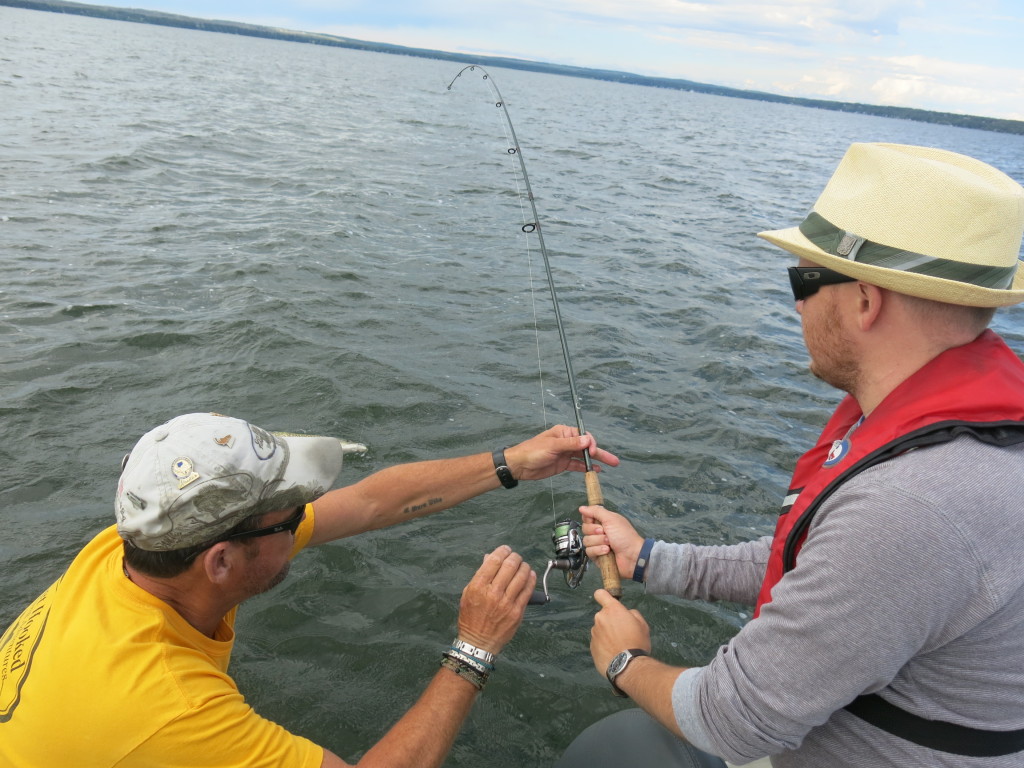 We pulled up to the shores of the beautiful Wabamun Lake and got a quick lesson in casting the reel. Â I was pleased to know that we werenâ€™t using live bait. But I was shocked to also learn that fish eat other fish.Â  Who knew? (Probably everyone.) The dayâ€™s weather couldnâ€™t have been more perfect and even being by a lake was making me feel more and more relaxed. After a few practice casts, we hopped on to Keithâ€™s boat and our dayâ€™s adventure really got started.

The thing I really liked about fishing with Keith was the high amount of success that we actually ended up having.Â  (Here, at least for me, success was measured by how many times we had an interaction with a fish.)Â  And there were a lot of interactions.Â  I think thatâ€™s probably because we were with a pro. Â I had always pictured fishing as a very boring activity, with very little payoff. At least thatâ€™s what they make it look like in movies and insurance commercials.Â  But because Keith knew the lake like the back of his hand, we were able to catch way more fish than I thought.Â  Every now and then, Keith would check the activity meter, but most of the time, it was like he could almost sense where the fish were hanging out. Even though the lake was huge, he could tell when had drifted too far in the wrong direction direction or heâ€™d look for other signs of where fish could be and more importantly, where they werenâ€™t. 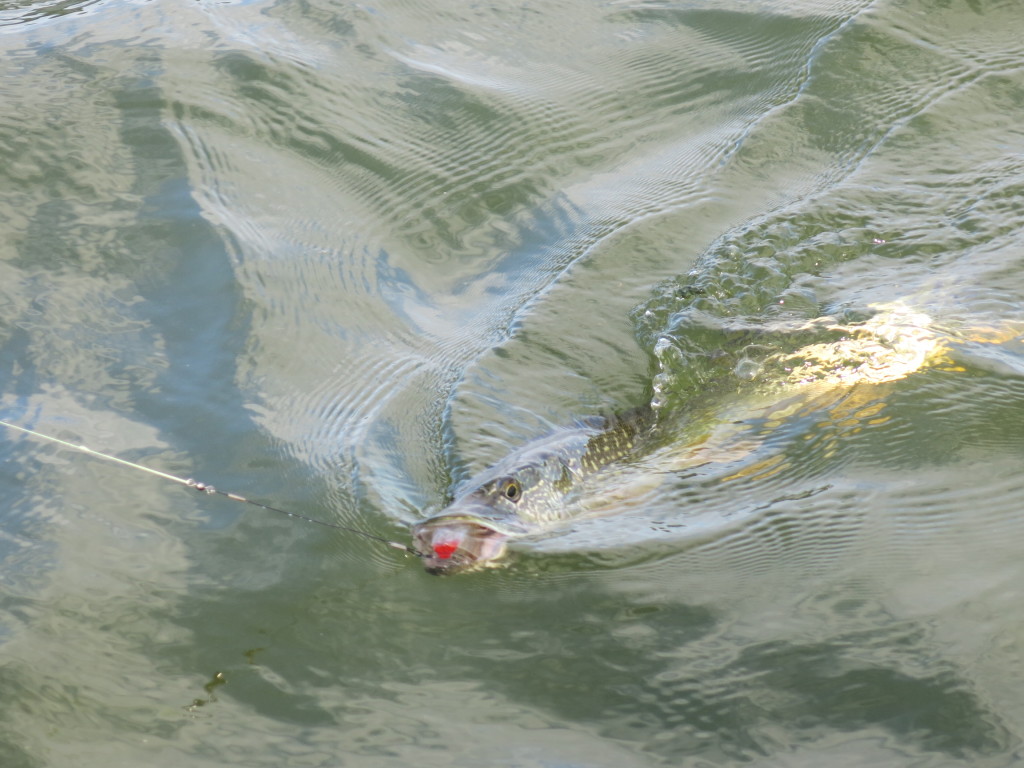 Iâ€™m not embarrassed to admit that a few times I had to ask for Keith help reeling the fish. Iâ€™m not sure if he was being fatherly or brotherly, but we both chuckled as I tried my hardest to reel in a few fish and lost the battle more times than not.Â  But, fishing might be the only sport where losing is just as exciting as winning.

As the day went on, we found lots to talk about and had a really great time hearing about Keithâ€™s success in the industry. A few times throughout the day, I wouldnâ€™t even cast a reel, Iâ€™d just sit back and watch him work. Â In terms of his expertise at his job, Iâ€™m not sure Iâ€™ve ever seen someone so skilled.

But because Keith was so good, he made me feel like I was good at it too. Which, as you might remember, is all I wanted to know. By the end of the day, we had actually caught and released about 26 fish. A number I still find astounding. I really thought weâ€™d catch about two or three fish, certainly not more than two dozen. 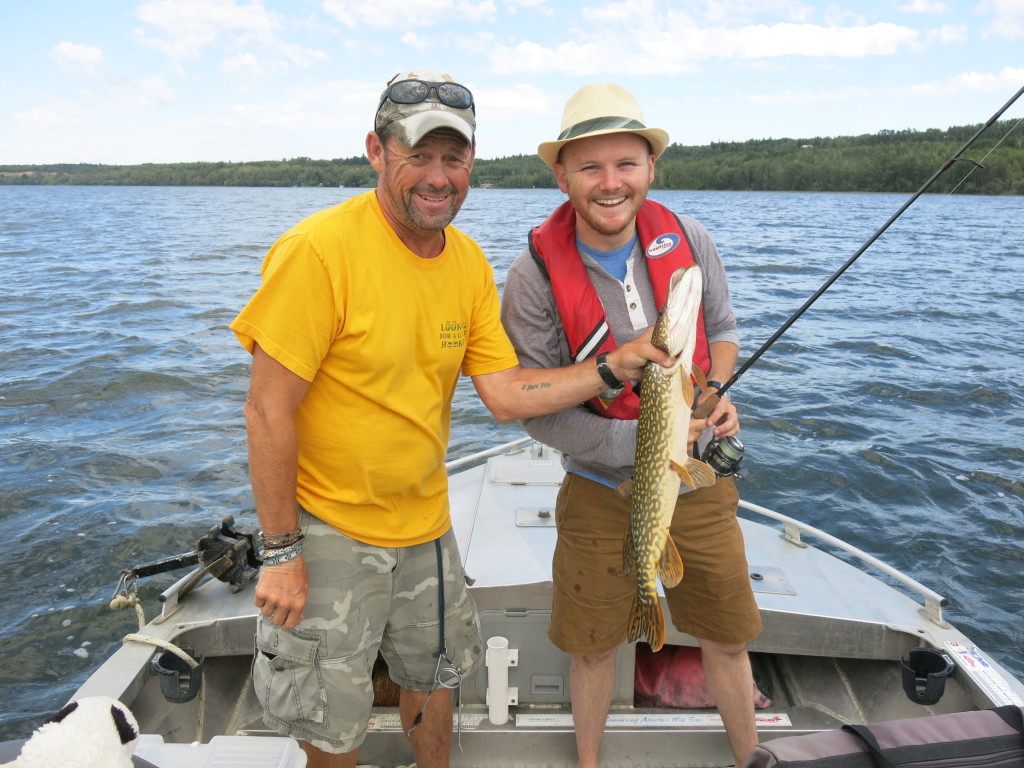 After five hours of fishing, chatting and not drinking anything, even though he offered, we returned to the shores of the lake having learned way more than I had ever anticipated.Â Â  Keith said weâ€™d have to come back and try fishing on a river, which definitely sounds exciting and completely different than fishing on a lake.Â  In terms of trying something completely new, I was totally thrilled with our fishing experience.Â  I know at 32-years-old, Iâ€™m not old, but I like what I like, or at least I thought I did.Â  There was a lot to like about fishing and my only regret is that it took me so long to get over my fears and questions about the sport.Â  Iâ€™ll be back. I just hope the fish are ready for me.

Oh and about going to the bathroom on the boat?Â  I donâ€™t want to talk about it. 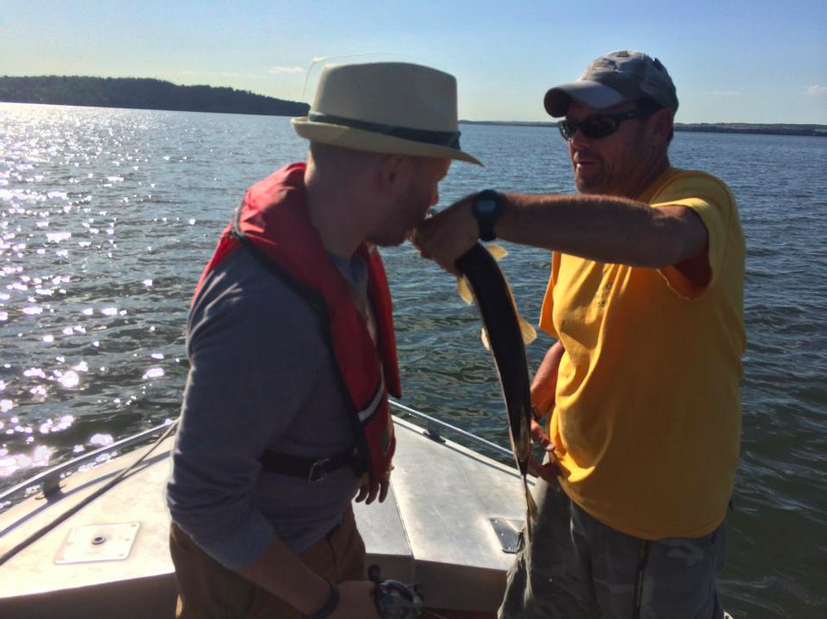