Get ready to SCREAM! 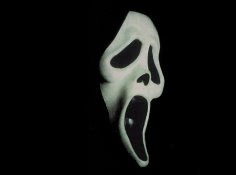 Holy Moses is it my birthday?
Nope, that is still 78 sleeps away.

Well if it’s not my birthday, i don’t know what I did to receive such great news, but Wes Craven just said in an interview that he would be interested in doing a Scream 4 if there was the right script!!!!

Apparantly Kevin “I never should have left Dawson’s Creek” Williamson, who also wrote the first two Scream movies, has written the fourth script even though Craven hasn’t seen it yet!

While I’m not a big fan of scary movie franchises, I’m super pumped at the prospect of seeing Sydney, Dooey and Gail Weathers back on the big screen! I think the franchise has been gone long enough that it would be able to generate some excitement.