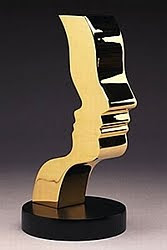 Finally a reason to watch the Geminis!

The nominees for the 24th annual awards that celebrate the best in Canadian Television were just announced and some pretty big shows racked up the nominations!

CTV’s Flashpoint is on top with a record 19 nominations. The Tudors (which isn’t canadian is it?) follows up with second place and 11 nominations. My favorite Being Erica picked up 9 nominations and so did Diamonds (CBC), Less Than Kind (City TV) and The Border (Global). Click here to see all the nominees.
I must give a special shout out to fellow Frederictonian Anna Silk! She is nominated for Best Performance by an Actress in a Guest Role, Dramatic Series for her turn as Erica’s lesbian childhood friend on Being Erica. Like you could forget that episode.
The awards will be handed out right here in Calgary on November 14th! I’m shockingly alarmed by how excited I am for the Geminis this year. It’s like me saying I like CSI; it just seems so foreign to me!