From guns to dinosaurs: All’s Grand in Grande Prairie!

In terms of booming cities, Grande Prairie is one of Albertaâ€™s “boomiest.” Over the past couple of years, itâ€™s become a hub for people working in living in north western Alberta and now I know why! I just got back from a great week exploring the area with Breakfast Television‘s Jill Belland and I brought with me some tips on how to give your adventurous spirit whatâ€™s itâ€™s been looking for. 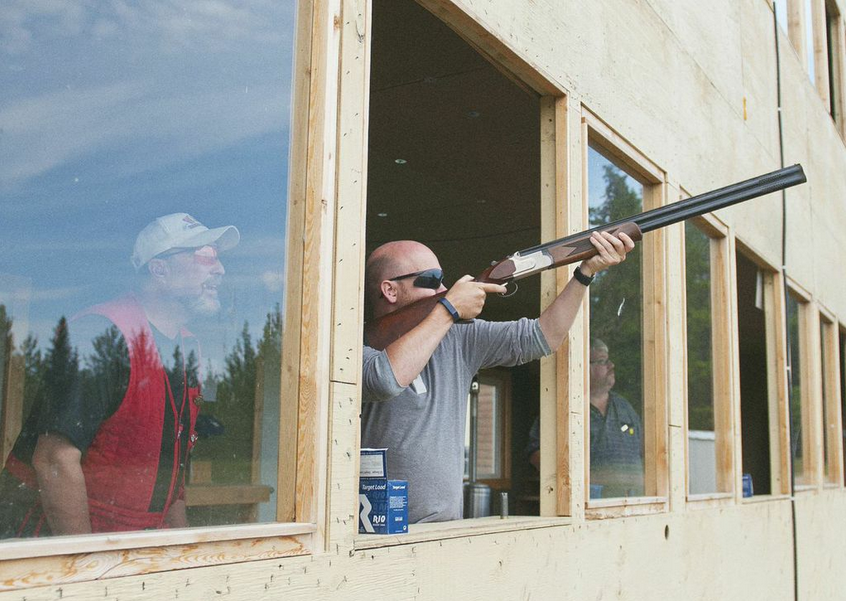 When I tweeted that I was at a shooting range, the reaction on Twitter was mostly confusion. Nothing in my life would lead you to believe that I would enjoy shooting and truthfully, I didnâ€™t know if I would. But I was told that Wapiti Shooters Club was a great place to learn and since the region is such a mecca for hunting, I thought â€œWhen in Grande Prairie.â€ But that doesnâ€™t mean youâ€™ll see me out in the woods tracking animals. I told the awesome guys at Wapiti Shooters Club, that I was more interested in shooting those clay discs things that were featured in the bonus rounds of Duck Hunt.

Since it was the first time I had ever held a gun or even saw a bullet, I was a little nervous, but really I was more scared that it would actually hurt. You always hear people say that movies are unrealistic because they never show the kick-back, so before we got to the range, I was already nervous that the kickback would throw me to the ground or something like that. (Bloggers arenâ€™t that strong, you know?)

But as it turns out, I had nothing to be scared about. I mean, holding and shooting a gun isnâ€™t super easy, but I imagine itâ€™s something that you definitely get used to. The kickback of the gun was easier and easier to deal with as I figured out my posture. And you probably wouldnâ€™t believe it if I told you, but I was absolutely shocked when I shot the clay disc on both my first and third attempts! I mean, Iâ€™m rarely that successful at anything, yet there I was, a regular olâ€™ sharpshooter. Honestly, who knew I had that sort of hidden talent! Actually, I donâ€™t think itâ€™s a talent as much as it is an indirect benefit of playing Buck Hunter whenever I get a spare moment. I freaking love that game and this is the closest Iâ€™ll ever want to get to playing it in real life.

Mostly it was great to learn about the sport from the professionals at Wapiti Shooters Club. Shooting can be scary, thrilling, fun and yes, dangerous, but I felt completely safe and loved learning about the sport. The shooting range just on the outskirts of town is definitely worth checking out! 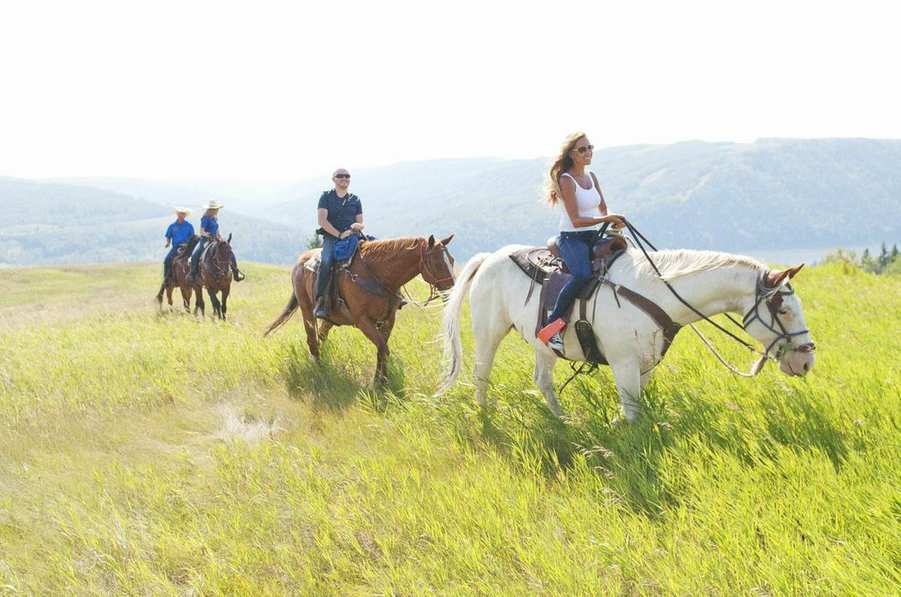 Iâ€™ve ridden a horse a few times before, but itâ€™s something that Iâ€™ve never tired of. Horeses really are on the of the worldâ€™s most beautiful animals and you canâ€™t help but smile when youâ€™re riding one. I really, really enjoyed my horseback riding adventure with Laureen and Harvey Kosheiff from Horse Trekking Adventures. You could immediately see the care and attention they pay to the animals, which is always reassuring. The business is set up outside of Grande Prairie, in the tiny town of Fairview, but they ride all over Alberta, including Peace River Hills, Fairview area, Kakwa Wildland, Wilmore Wilderness, Hummingbird Rec. Area, and as far as Ya-Ha-Tinda. On the day we caught up with the horses, we rode through the absolutely beautiful Dunvegan Park, which I had never heard of and know that Iâ€™ll never forget.

The park is just stunning, especially considering that it comes out of no where. Youâ€™re driving along the typical Alberta flat highway, then BAM, you head down into a valley and youâ€™re surrounded by lush trees and the historic Peace River. The Dunvegan Bridge is particularly beautiful. My horse and I spent the better part of an afternoon riding through the rolling hills of the park, trying to take in all the beauty the park has to offer. It honestly felt like we were in a commercial it was so picture perfect! Thoughout our ride, Harvey had lots of great stories about the history of area, which only added to the experience and began to gave me a better appreciate of the historic region that helped form so much of western Canada. Seeing it on horse gives you a taste of what it would have been like a hundred years ago…although the original cowboys probably didn’t giggle as much as I did: 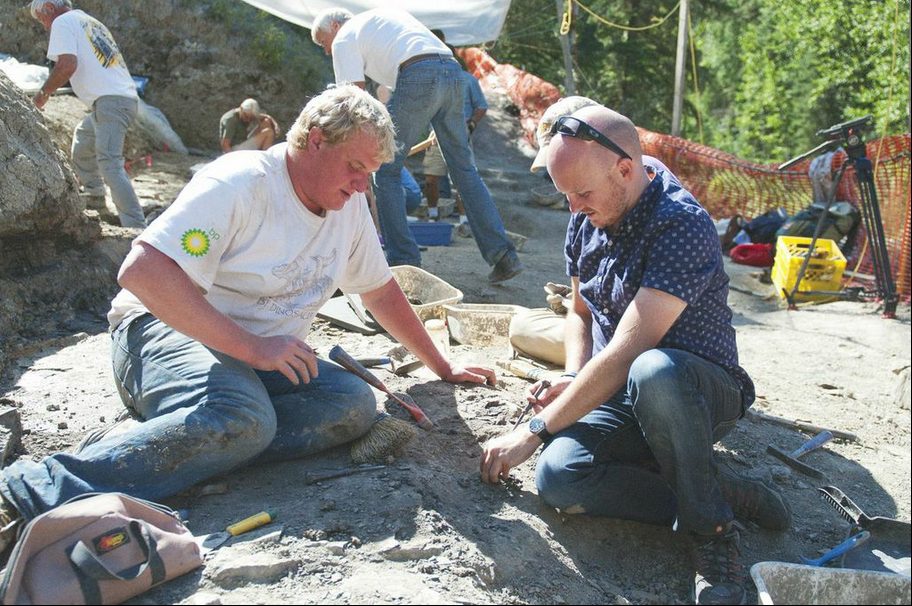 Places like Drumheller, Alberta are famous for all their dinosaur bones, but I was surprised to hear recently that Grande Prairie is actually home to some of the densest bone collections in all the world and, theyâ€™re just starting to find them. The Pipestone Creek bonebed is a massive gravesite for the Pachyrhinosaurus and dates back 73 million years. Near the bonebed, will be the new Philip J. Currie Museum, which will officially open in 2015. When it does, dino digs will be one of the programs available and I canâ€™t emphasize how much you have to do one. Taking some time to dig a little alongside the paleontologists is one of those rare life moments that youâ€™ll talk about forever. I got to do it for a few minutes and in that time I learned so much about dinosaurs and the science of paleontology. Plus, it only took a few minutes until we found a rib fossil, which I then promptly broke! The professionals assured me that happens all the time and not to worry about it! But how could I not, I just broke something that was 73 million years old! Stay tuned to the museumâ€™s website for when the program opens back up. Itâ€™s a must-do! 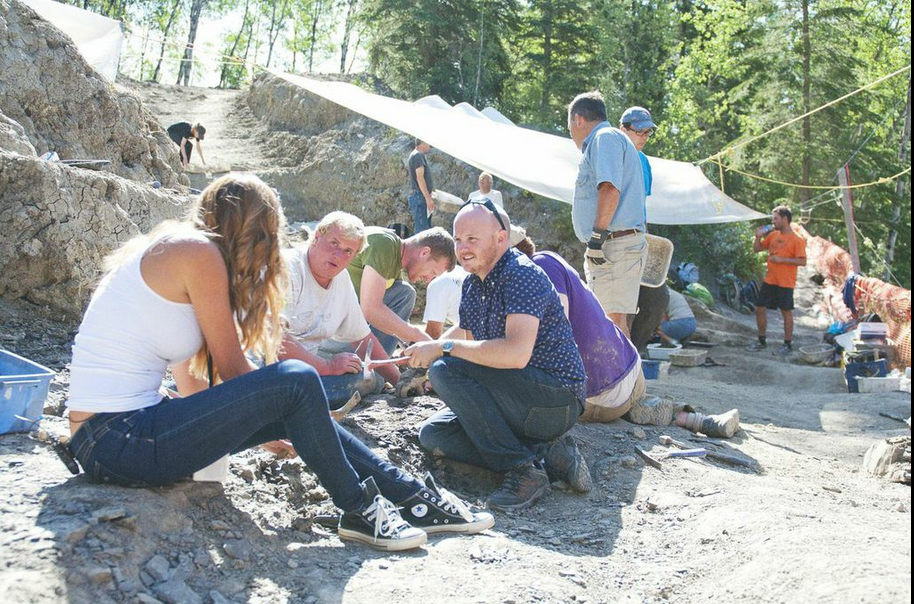