From Eric Clapton to the Rolling Stones, inside the National...

It is only a matter of time before the National Music Centreâ€™s new home at Studio Bell officially opens its doors to the public in Calgaryâ€™s East Village. Beyond the incredible new building that looms over 4th Street SE and the re-opening of the iconic King Eddy, something even more special will live at NMC. Now what could be more special than Canadian music history, you ask?

Well, quite possibly the most unique recording environment in the world. Yes, youâ€™ve heard it correctly. The National Music Centre (NMC) will be offering musicians, through its Artist in Residence program, the ability to record music using the exact same consoles that legendary groups like the Rolling Stones used for various projects throughout their careers. NMCâ€™s recording facilities could, in time, become the most famous place to record music in all of Canada.

Combined with modern technology, there are three famed recording consoles housed inside Studio Bell. Each console has its own rich history and has been used by some of the most well known musicians of our time.

The Olympic console is originally from the renowned studio in London, England, where recordings by Eric Clapton, Motorhead and Elvis Costello were made through the late 1970s. Can you seriously imagine pressing down the same fader that Eric Clapton might have touched? There has got to be some magical music dust in there somewhere, right? 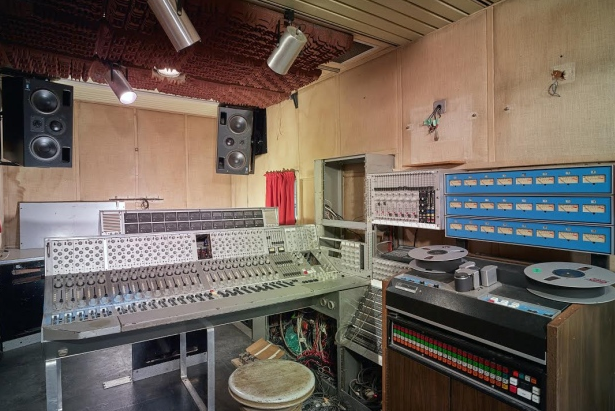 The Rolling Stones Mobile Studio (RSM) is one of the most famous consoles, having been featured in several music documentaries over the years and used by none other than the Rolling Stones and, notably, Led Zeppelin and Deep Purple. The RSM is literally a bus completely outfitted with everything you need to record an album, including the iconic Rolling Stones lips emblazoned on the back doors. The initial inspiration for the RSM was to record an album at Stargroves, Mick Jaggerâ€™s country home, back in 1968. They wanted to remove the limitations of a traditional recording studio, so they created this bus that held all of the necessary audio equipment to capture their latest sound.
Last, a console that has attained â€œnear mythical status in the professional recording industry,â€ the Trident A Range console is the third vintage console in NMCâ€™s recording trifecta. Made in London in the early 1970s, this console was then shipped to Denmark, then Los Angeles, and recorded the likes of Stevie Nicks, Madonna, and Beck, to name a few.

Combined, these three consoles could certainly change the face of Calgaryâ€™s reputation for recording studios and Canadian music in general, one track at a time. While viewing the recording studios will be available to the public through guided tours, musicians will have full access to the recording studios and consoles through the Artist in Residence program. This program will bring in upwards of 40 artists per year, within the first few years of Studio Bellâ€™s opening, to explore and experiment in a truly inspiring environment.