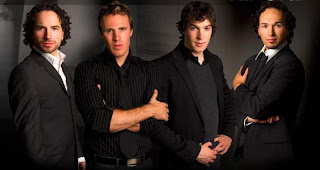 If there is one thing in the world I love, it’s a free concert.

Next Tuesday, that’s December 1st, there will be a free-t0-the-public Christmas concert that will be held in Calgary to raise money for the Calgary Verterans Food Band!
Some of the acts showing up include The Canadian Tenors and Carol Welsman! You can also look forward to 9-year-old piano prodigy Christian Laurien, Danny ZZZ and the Dragon Den’s W. Brett Wilson will be the Master of Ceremonies!
And this isn’t one of those “stand outside in the freezing temperatures” concerts. This is the real deal. The concert will take place the Jack Singer Concert Hall from 7:30pm-10pm. If you haven’t been to a concert there yet, that place is NICE.
To come to the concert, all you have to do is bring a cheque payable to the Calgary Veterans’s Food Bank. Okay, so it’s not technically free, but it’s totally worth it. It’s for the veterans, so it is the least we could do right?
If you can’t make the concert, why not donate anyway. Visit the Calgary Poppy Fund.