>Now Available on The Q

Dear Readers, Let me prefix this piece by stating that it turned out to be more of a rant than originally intended. If you are patient and sarcastic enough, I feel like the pay off is worth it.

If there is one thing I love about Calgary, itâ€™s the concerts! Iâ€™ve said it before that I lov 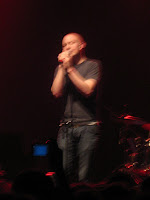 e that we get a wide range of different types of music for all to enjoy. Except Polka, we never get enough polka. If there is one thing that I HATE about Calgary, itâ€™s the lines. Because of the massive worker shortage you always have to wait in long lines, or come back when they arenâ€™t so busy. Which is never.

Tonight somewhere on the University of Calgary campus my biggest loves and hates combined when The Fray made their debut Calgary appearances.

I knew it was going to busy, tickets sold out within minutes when they went on sale in January and even faster when they released a new set in early March. Because it was rush seating my roommate and I got their what we thought was early for the band that has been made famous on shows like Greyâ€™s Anatomy, Scrubs and The Hills.

We got there a full hour before the doors even opened at 7pm for the 8pm show and there were already at least 150 people in front of us! We couldnâ€™t believe it, but once we got into line we were even more amazed at how fast the line grew behind us. It was like the passport office, which didnâ€™t make me feel very good. 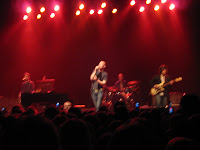 It wasnâ€™t until around 7:30 that the line started moving into Mac Hall, by this time we had been standing in line for nearly 90 minutes and werenâ€™t feeling too hot. This is where it gets ugly folks: Everyone loves The Fray, no one apparently more than teenage girls. If there is one thing teenage girls know how to do it is to butt in line and act like they didnâ€™t know that they just did it. Now for anyone that knows me they know that Iâ€™m not very confrontational, but they were butting on my turf and I was having none of it. Needless to say, words were said. Harsh words. Words that didnâ€™t necessarily work, but those Bratz dolls wannbes will remember me next time they see an angry bald guy in line and think twice about butting. Also I called at 13 Victoria Beckham. She took it as a compliment, it wasnâ€™t. 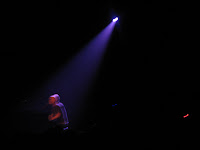 However, once we got into the room itself we quickly moved as close to the stage as possible. We never understood why The Fray werenâ€™t playing at a theatre with seats, itâ€™s not as if the band is a Nirvana waiting to happen. They play nice ballads,that in my opinion are best enjoyed sitting down.

But alas there were no seats so we were left to stand. Luckily we met some very nice people in line and ended up standing by them for the concert too. We made an alliance to not let anyone squeeze through us and Iâ€™m proud to say our Maritimer-Red Deer alliance held tight throughout the night.

A little after 8 a man holding a guitar approached the centre stage and the crowd went nuts. It was at this point that I realized no one, not even me, even knows what a single member from The Fray looks like, because folks this man not a member of the band, he was indeed the opening act and it took the audience a good three songs to realize this.

Finally after the opening act wrapped up a way too long set we excitedly awaited the bands appearance. During the wait I realized something else, if I was a producer for Degrassi Junior I could have come to this concert and held a giant casting call. I was surprised at how many pre-pubesant little brats there were. Donâ€™t these kids have curfews or parents for that matter?

Now this is where my problem with lines and waiting takes a turn for the worse. So the Fray are a good band, not a great band. They are not historic and will probably fade away in a couple of years. But they, on the other hand, seem to think they are all that and a bag of Dill Pickle chips because it wasnâ€™t until nearly 9:30 that the band graced us with their presence. This is 3.5 hours after we started standing in line. 2 hours after we got into the room. And an hour after the Gavin Degraw wannabe finally got off the stage. Also not a compliment. Keep up.

Now just who do they think they are that they think they can make an audience wait that long? I know they were in town, I heard them in interviews on almost every station. Do they think it was building suspense? Because the audience of future degrassi rejects and me and my new found friends were restless, hot and annoyed. When they finally began the concert I would say it took at least 3 or 4 songs to win the audience back.

I understand they probably had their reasons but for a concert like The Fray and the type of music they play this wasnâ€™t following proper concert etiquette. By the end of the night legs were numb and patience wasâ€¦wellâ€¦Frayed. Haha.

Did I have fun at the concert? Absolutely. Will I ever go back to a concert at Mac hall only to wait to 3 hours to stand behind a bunch of teenage brats that feel the need to take pictures with their cameras and cell phones then call people on said phones to tell them they got pictures of the concert only to then watch them text their friend that they were previously speaking to because they couldnâ€™t hear them talk on the phone becauseâ€¦THEY WERE AT A CONCERT.!!! And breathe. Also, when did cell phone screens become suitable replacements for lighters. I donâ€™t think the band wants to see pics of you and your dog or your friends drunk at Cowboys. I know I donâ€™t.

To answer simply No, I wonâ€™t go back to Mac Hall. Except it is on the same campus as where I work. So yes technically I will go back, but hopefully not for a concert. The Tim Hortenâ€™s line is just long enough.