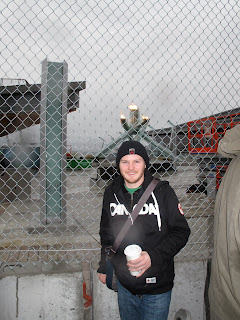 It took me a bit of searching this morning, but I finally found the Olympic cauldron. If you watched the Opening ceremonies, you know that Wayne was on that truck for quite sometime. But after some Veronica Mars-ing, I was able to track down the giant Olympic cauldron.

The giant bummer was that it was behind a huge metal fence. Which would be fine, if they didn’t make people stand so far back from it.
Seriously, I understand it is for the cauldron’s protection, but the distance is a little excessive. Especially since you can only access it from one side.
Hopefully security will lighten up a little bit over the next couple of days.
Yeah, I didn’t think so either….
Go Canada Go! 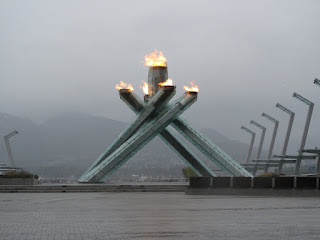