by Mike Morrison 10 years ago7 years ago 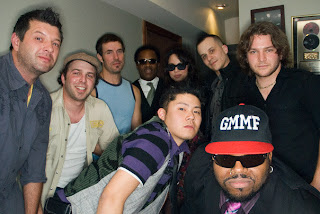 Canadian Idol winners have never really found a huge amount of success. Either they disappear off the face of the earth, or they bury themselves under a pile of lame-ass scarves.

But one Idol winner seems to be bucking the trend.
When you first think of Calgary’s Melissa O’Neil, you might be inclined to think of her as a one-hit wonder from the third season of Canadian Idol. Some wouldn’t even consider that. She was also known for dating Idol runner-up Rex Goudie. Neither her relationship nor her Idol fame lasted very long.
But if you’ve been to Toronto in the past couple of years, you might know that O’Neil has slowly been building herself some music cred, which isn’t easy to do after Canadian Idol. Is it Ryan Malcom?
Many theatre fans were delighted by her performance in Mirvish’s Dirty Dancing and she recently did a show with Stage West Calgary.
But on to the really cool news: I’ve come to find out that O’Neil is now the lead female vocalist for the funkiest band in Canada, God Made Me Funky! What a freaking solid career move on Melissa’s part!