>Also available on The National Post’s The Ampersand 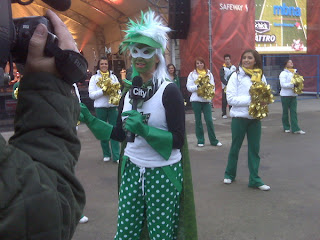 When the Grey Cup was awarded to Calgary, I was about as excited as someone standing in line for the H1N1 vaccine. It shouldn’t come as a surprise that I’m not a football fan and that any excitement I might’ve had for the CFL’s fall classic was gone when the Stampeders lost in the semi-finals. Of course, that sliver of enthusiasm was for how local businesses would’ve benefited from the home team in the big game.
But fan of the pigskin or not, the Grey Cup festivities descended upon Calgary this past weekend and, against all odds, I think I sorta/kinda/maybe became a football fan. Iâ€™ve never really understood football, my basis of knowledge consisting solely of three seasons of Friday Night Lights (the best show on TV!) and mistakenly playing Madden â€™95 on Super Nintendo once when I was a kid. Itâ€™s enough to understand what a quarterback does, but not enough to stop myself from giggling when someone says defensive end. I mean, when a team’s called the Roughriders…that’s supposed to be funny, right? 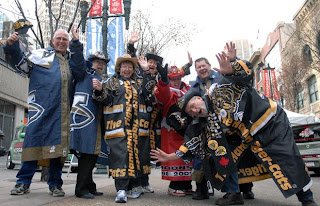 In the days leading up the big game (it is just one game, right?), Calgaryâ€™s Stephen Avenue became the hub of a three-day street party. I didnâ€™t live here during the infamous Red Mile Stanley Cup run, but I figured this was a decent approximation of that experience…by which I mean “people jumping on the geographically closest teamâ€™s bandwagon all over the place.” Anyone walking the street party will have told you that the mood was infectious. People were playing football in the streets, screaming out a sport teamâ€™s name whenever they got the chance, and there were enough high-fives to shame Arsenio Hall. Thatâ€™s right, I just referenced Arsenio Hall.
True to Calgary form, Stampeders fans were out in full force. Wearing their teamâ€™s jersey, you’d often hear them scream “Stampeders Rule” or “Stampeders are #1.” Maybe this is my lack of football knowledge coming into play, but the Stampeders lost, didnâ€™t they? I donâ€™t think they’re even #2–maybe #3 or #4? I had to assume those fans simply hadnâ€™t heard the news.
And the event wasn’t just for football fans: I saw dozens of the cityâ€™s homeless having a great time as well. They, like everyone else, were picking up free swag, dancing in the street and jumping into photos. This would normally alarm visitors to our downtown, so I chalked it up to confusing the homeless for Edmontonians. Itâ€™s an easier mistake than you might think. 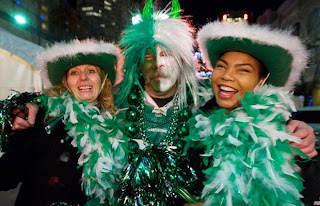 But it was easily the Roughrider fans who made the biggest impression on the Grey Cup festivities. Calgary has long been a haven to those who grew tired of the prairie life, and this weekend they came out of the woodwork like nothing this city has seen before. Every second person was covered in green. On Sunday morning, I made the mistake of wearing a green jacket and was high-fived to the point of practically blistering my hands. Of course, I did have one Alouette fan spit at my feet, but I think that is how they say hi in Montreal and, therefore, took it as a compliment.
While Iâ€™m far from converting to full fledged, non-lite beer drinking football fan, I have become slightly enamored with the events leading up to the Grey Cup. I still donâ€™t know the difference between a field goal and a punt, but I do know who’s playing this year. Trust me: thatâ€™s an improvement.
Go A Sports Teamâ€™s Name Go!
images:
top photo-via @kirstenellen
bottom two- via The Calgary Herald