Food for a Maritime Palate! 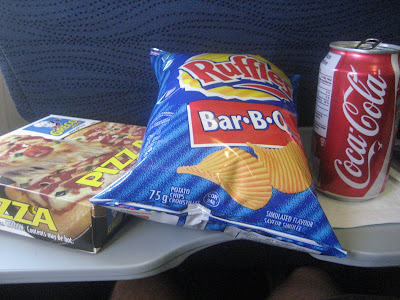 Iâ€™m not really that special. There are thousands of people like me in Calgary. A Maritimer drawn to the big lights and potential of big bank accounts that our hometowns will never be able to offer.

Unless youâ€™ve moved across the country you donâ€™t really know what it is like to go from a cozy place like the Maritimes to a city of over a million. For us, a traffic jam is usually about 3 blocks and is usually caused by one of our drunken uncles. We donâ€™t have dozens of radio stations. We have two. One plays Anne Murray, the other Nickleback (hey, we are still Canadian). We put up with a lot of changes that comes with the big city but sometimes when the opportunity presents itself we have to rush home on a plane to get a little taste of what most Maritimers miss the most: the food.

Of course there is the seafood. Lobster seems to grow on trees. We eat Salmon in our yogurt and donâ€™t even get me started on potatoes. But that is obvious. The food Iâ€™m talking about isnâ€™t the kind that is mentioned in the tourist guides, what Iâ€™m talking about is real food. Food that you can only get in the Maritimes, itâ€™s so good that no matter what time of day it is you are thinking about it. Iâ€™m talking Calgary Stampede mini-donuts good. Yes I went there.

This past weekend I had the chance to go home for only a few days. There were several things on my to do list. I wanted to see my family, go on a boat, splash in the ocean and eat.

The first thing I had to eat was Greco Pizza. Ask any of us this question: â€œItâ€™s 2am on 17th ave and youâ€™ve had too much to drink, what do you want to eat?â€ Every single Maritimer will always say a Greco Party Pizza. And no, Iâ€™m not talking about the crap Greco that Air Canada serves. Real Greco Pizza is like what oil is to an Albertan. Yummy. Itâ€™s a square pizza of epic proportions. Mushrooms so waxy that you donâ€™t even know what you are really eating. Crusts so greasy you shave your face before eating it for fear of grease build up in your beard. To give you an idea of what Iâ€™m talking about, last year I was home for Christmas for three days. My mom asked what I wanted to eat for my special meal. Without hesitation I replied: Greco Party Pizza. Yes folks, itâ€™s better than a Christmas dinner.

Second on my list was Ruffles BBQ Chips. I have no idea why you donâ€™t have them out here but you are missing out. These chips are like heaven in your mouth and even though I had 4 bags in the fours days I was home it was worth every trans fatty calorie.

Next is what most people believe to be a myth. The famous McLobster. Thatâ€™s right, while you guys have the McRib, every summer us Atlantic Canadians get to enjoy a fresh lobster sandwich with our supersized fries and happy meal toys. It is has to be tasted to be believed, but trust me, I ate enough of them this past weekend to debunk the myth of the mysterious McLobster. Itâ€™s real folks. Real good. 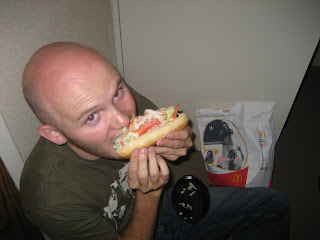 So although we will still eat your Vietnamese food and we love Beef on a Bun as much as the next guy, we still love and crave our very own food. But is it enough to get me to move back to my humble abode? No. We Maritimers are a resilient bunch. We have made our homes amongst the Prairie dwellers and can now move throughout the province fairly un-noticed, until someone some poor cowboy asks us the eternal question: Starbucks or Tim Hortens? Then all bets are off. And you donâ€™t want to mess with a generation of people who had to square dance in Gym Class. It just wouldnâ€™t be fair.