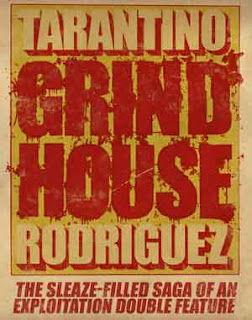 Why I didn’t go see GrindHouse:
It was about 4 months ago that I posted the Grindhouse trailer and was so excited about it. The directors were kick ass, the cast was amazing and the concept brought life to todayâ€™s increasingly dull cinematic landscape. I could barely wait for April 6th, so I could be one of the first to see this amazing new take on a classic genre.

Then April 6th came and went and now it is over 2 weeks later and I still havenâ€™t seen Grindhouse. Apparantly if you follow boxoffice statistics, Iâ€™m not the only one who made false promises to this movie. As of today, Grindhouse has made just barely over $20 million. This is an embarrassing talley consider who is involved in the project.
Even as I sit here now, Iâ€™m trying to think of what went wrong.

For me, the easiest way to explain why I havenâ€™t gone to see Grindhouse is this: Itâ€™s way too long. When you combine both movies with the fake trailers, the movie runs just over 3 hours. And I donâ€™t know about you, but who has that kind of time. I usually try to stay far away from movies on the weekends and on weekday nights, I barely get three hours before I have to go to bed to get ready for the next day.

When I heard about this project, I presumed the moves would be much shorter. I thought about an hour each, bringing the whole kit and kabutal to just over 2 hours, a much more reasonable time. But three hours is almost ridiculous. I canâ€™t think of the last movie I saw that was that long. It might have been 2005â€™s King Kong, but even that was under 3 hours and almost as bloated as the giant monkey himself.

So why havenâ€™t you gone to Grindhouse? Surely Rodriguez and Tarintino can draw in audiences individually, but why not as a tag team? It looks like the movie studio is actually going to re-release the movies later this year as two separate films. I wonder if this will work, or if they should just call it what it is: a big giant bloody flop.