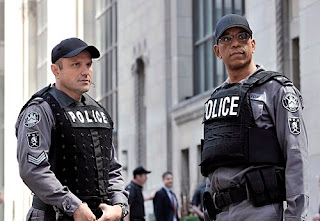 While Canadians still flock CTV’s Flashpoint in droves, it turns out the our friends in the States might have to find their fix elsewhere.

CBS, which owns the broadcast rights to the show, said this weekend, that they don’t have plans to air the 18 episodes that Flashpoint has in the bag, during this 2009-2010 season. They may or may not pop-up this coming summer.
The “problem” is that CBS is having an amazing season and they just don’t have the real estate for the show. While I wish they would put shows like The Ghost Whisperer and Numbers to death, the fact is that they still pull in decent enough numbers. Even though, I don’t know a single person who watches either of these shows.
Meanwhile, thirteen new episodes for Canadians, will begin filming this month. You should expect to see them return after the Olympics.