Okay, so here we go. This is probably the most embarrassing thing I’ve ever posted on the blog. And that’s saying something. This weekend, while hanging out on the set of the current Muchmusic VJ Search, I remembered the two times I myself had auditioned to be a VJ. I also happened to remember that that I had one of those auditions on DVD…which I have now just uploaded to YouTube.

This audition was for the 2006 edition of Much’s VJ search. The nation’s music station was doing a cross country casting call and they stopped at the University of Calgary. Tim Deegan would eventually go on to win the whole show, I’m not sure, but I think I cam in a solid 92,345th place.

Let’s get one thing straight, this was a LONG time ago. This was shot two days after I moved to Calgary. This is about a year before I started this blog and probably the first time I ever did something in front of the camera. Going in, obviously I knew I wasn’t what Much was looking for.Â  You know, super skinny and bald. But I had just moved here and didn’t know anyone in Calgary, so I literally had nothing to lose.Â  Plus, I had always loved Much, so I figured, why not!

I had totally forgotten about this video until a few weeks ago and I was wondering what to do with it. Then when I heard about Muchmusic doing another VJ search, I thought it would be the perfect time to go down memory lane.Â  To tell you the truth, I’m mortified at how awful this video is. But in the same breathe, it’s amazing to watch. here is this video that captures my life at the time. I had no idea what I was going to be doing with my time in Calgary. I had just graduated with aÂ  B. Ed and a B.A in Spanish and that’s about it. 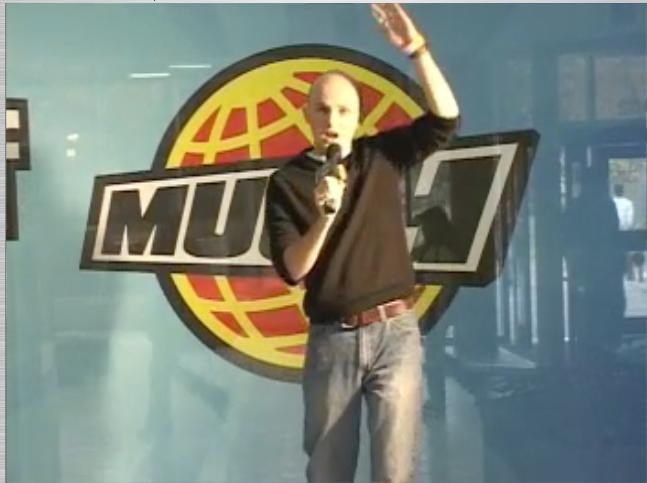 I don’t remember much about that day, except that people were really nice. I had watched a few people go up and I thought if there were rankings, I would likely fall somewhere in between, which is usually all I need to know when I do something that makes me nervous. I’m not 100% sure, but I’m pretty sure Aliya-Jasmine Sovani was one of the producers and talked to me off stage. She said I did good, but clearly that is something she said to everyone. CLEARLY.

Guys, I’m not being hard on myself, I’m being realistic. My sign off is “Peace.” I think that is the one time in my LIFE that I said that.Â  That’s how nervous I was. But it was also a ton of fun. Like going on a scary ride or first date, it always feels so good when it’s over, especially when you realize that you really had nothing to be nervous about in the first place. In my books,Â  an accomplishment is an accomplishment.

Anyway, here it is. Enjoy, laugh, cry and laugh again. I know I did.