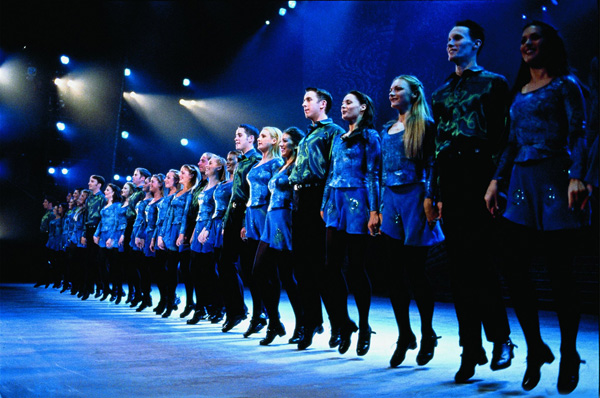 Tonight the fast moving fancy-free feet of Riverdance came to Calgary for an exclusive one week engagement.  If I’m being honest, I’ve probably never had Riverdance on top of my MUST SEE list, instead the show was probably always on my HAVE TO SEE list.  Ever since the show premiered nearly seventeen years ago, I’ve had memories of sitting around the TV with my mom watching show after show on CBC. Seeing Riverdance is a Canadian rite of passage and tonight was the night.

Because I’m a good audience member, I didn’t tweet during the show but sometimes, I find myself thinking in short 140 character bursts.  Am I saying that I think in tweets?  Yes, Yes I do.

Here are five tweets that came to mind during Riverdance:

-Are they making it look easy, or is it just easy?
Not that the spectacle of the show wasn’t impressive, but really aren’t they just doing the same five moves over and over?  Intro to Irish Dance must be the shortest class in the entire dance school.

-These dancers easily must have the weakest upper bodies (outside of curlers.)
Even  ballet has a few lifts?  In Irish Dance the hands barely get higher than their wastes.  Their arms are probably 1/32nd the size of their thighs.

-This show has remained untouched since it premiered in 1994.
This is great if you’re like me and you’ve never seen the show. But if you’re a repeat viewer, you might be disappointed.  Kinda like the second time I saw Elton John.  It was exactly the same show two years later. If artists know this is the case, they should post a warning: “Show remains the same, check back soon.”

-Why am I such a sucker for large group dance numbers?
Even the most cynical person would have a hard time resisting the excitement that comes from watching Riverdance’s huge dance numbers.  They are stirring, exciting and dizzying.  They get me every.single.time.

-Poor Riverdance, they really felt the wrath of Calgary’s “I’m not clapping unless everyone else is clapping” unspoken rule tonight.
You may or may not have heard that Calgary has one of the worst reputations for being a cold audience.  I’ve seen people sit through an entire Jason Mraz concert, Swell Season essentially told the audience to fuck off at last year’s Folk Fest and at that same festival, another artist left the stage in tears.  Yes, this city can be brutal. Tonight it took an hour and forty five minutes for the audience to finally get behind the dancers, and that’s after they were essentially begging the crowd to clap.  I’d love to be a fly on the dressing room when they are talking about Calgary crowds.  Even the standing ovation was weak, it’s Canada, you know you are going to get one.  But I think most people in the audience were just getting up. Oh well, a standing O is a standing O.