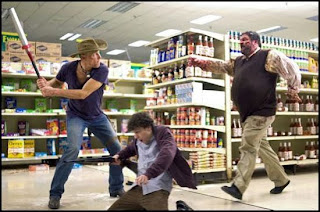 After a wisdom teeth procedure, the dentist tells you one thing: get lots of rest. And lots of rest I did. It gave me an amazing chance to sit on my ass and do nothing all weekend; guilt free. It doesn’t get much better.

I used my time to catch up on some movies that I’ve been meaning to watch.
Here are some mini-reviews of all the movies I watched this weekend:
Zombieland: I loved this movie when I first saw it in theatres and I loved it even more on blu-ray. While I was watching it I remember thinking how it will be added to my roster of movies I can watch over and over again. Other movies currently on the list include About A Boy and Love, Actually. Another plus, is it’s short run time. At only 80 minutes, it is a lot of fun in a small package!
Fame: I heard it was bad and it turns out, it really really was. I was disappointed because it had such an exciting trailer, but the story was too spread out. It tried to cover to much and didn’t feature enough Bebe Neuwirth. Then again, none of our lives have enough Bebe Neuwirth.
Funny People: I don’t think I got it. I know it wasn’t supposed to be like the other Judd Apatow movies, but it kinda seemed like even they weren’t too sure what they should be doing. And it almost felt like two completely different movies. If anything else, Judd’s family has a lot of great scenes to add to their acting reels.
SAW VI: Don’t worry, I rolled my eyes at this one too. I’ve watched every other one, so I feel like I have to know what’s going to happen. What’s frustrating is that I can easily follow five seasons of Lost. But 88 minutes of Jigsaw and I’ve never been more confused. Simply terrible.
28 Days Later: One weekend, two zombie movies. Couldn’t be more excited. Can you believe I’ve never seen this British horror classic. It was dark, scary, exciting and un-predictable. I loved it. I’ll have to follow up with 28 Weeks Later.
reviews