There’s probably no album that I’m looking forward to more this year than Metric‘s Syntetica. Although it won’t be out until June 12th, details about the highly anticipated disc are slowly being released. 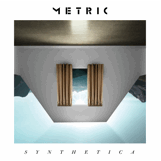 First things first, the album’s cover is out and ready for you to ogle, or perusing, whatever you prefer. “We wanted the artwork for Synthetica to be thought provoking and a little disorienting, an optical illusion which asks you to stop for a moment and consider what you are looking at,” says lead singer Emily Haines. Oh, just typing the Emily Haines feels good. God, I’ve missed this band.

The band has also leaked the albums track listing, which will feature 11 new songs and kick off with the single “Youth Without Youth”, which will be available for download on May 1st. I’m not sure what you’re supposed to do with this information, but for some reason, it makes super Metric fans like me very happy, so here’s the complete track listing:
1. Artificial Nocturne
2. Youth Without Youth
3. Speed The Collapse
4. Breathing Underwater
5. Dreams So Real
6. Lost Kitten
7. The Void
8. Synthetica
9. Clone
10. The Wanderlust
11. Nothing But Time

As for tour dates, Canadians will have to wait a while, as there is only one date in Canada announced this summer.  Montreal will play host to the band from August 3-5 at the Osheaga Festival. But don’t be surprised if you see a big ol’ North American tour announced this summer!