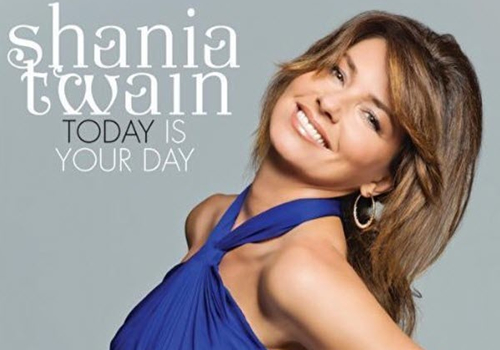 She’s sold more than 75 million albums but she’s also had one of the most public breakdowns the world of Canadian entertainment has ever seen.  So how does Shania Twain make a return to the music scene without an uber amount of scrutinary and judgment? She doesn’t.   After all, it’s been seven years since she released a song, that feels like a lifetime before blogs and itunes, there was no twitter or Perez Hilton, nope.  It’s a different world for Shania Twain, so I imagine she was a bit nervous when she released ‘Today Is Your Day’ earlier today.

Fans of her OWN show, got a sneak peek of this song in the show’s premiere, but it was never mentioned that it would indeed be the first single. Well now that it’s out and ready for download, have you listened to it yet?

First, it’s just so great to have Shania back.  My IPod has missed her dreadfully and hearing that her vocals are as strong as ever, makes it that much better.  The song, about staying strong no matter what life throws your way, is a tad cheesy and tailor-made to the next American Idol sign-off song, but her true fans will love it just the same.

The version available on ITunes is great, but I actually preferred the more raw and acoustic version featured on her show, it was haunting.  Have a listen to it below.

Given how public her life has become in the last few years, it would be shocking for her to release a “Man, I feel like a Women” type song.  That’s just not where she is yet, so I’m happy to settle for a more subtle song.  It’s going to be a long road back for Shania, I’m just happy to be along for the ride.