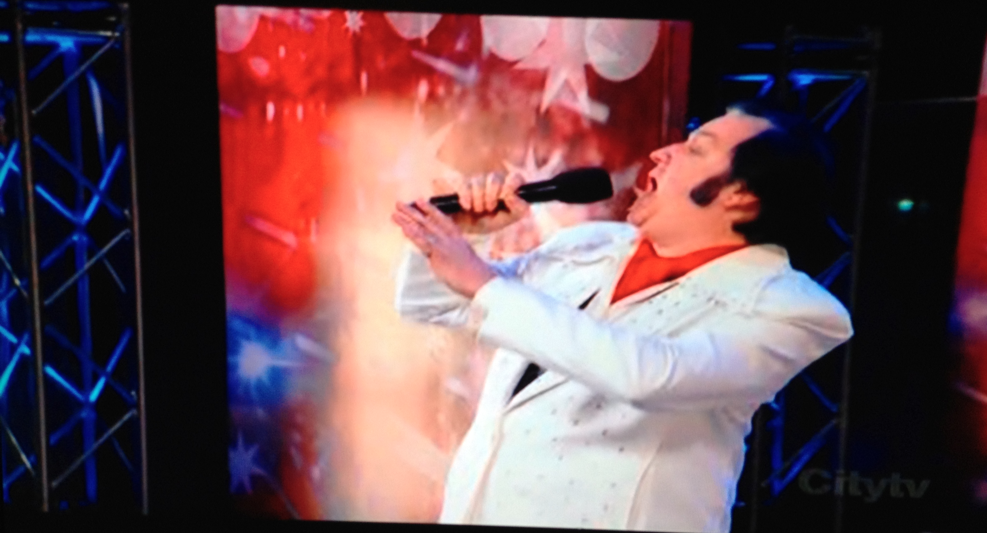 After months and months of auditions and promotion, we finally got its first look at Canada’s Got Talent tonight.Â  Right from the start, host Dina Pugliese showed us that the show was going to be huge….given the fact that she did it from high atop of the CN Tower!

The judges for CGT feature three power houses in the Canadian entertainment industry, including Opera superstar Measha Brueggergosman, composer Stephan Moccio and the one and only Martin Short.Â  All three really contributed to the show greatly, adding excellent commentary and sincere appreciation for the talent. Although Moccio did fall behind, which is too be expected, since he’s sitting beside the larger than life (both in hair and clothes) Brueggergosman.

The show might look Canadian (hello, Tim Hortons cups), however, the prize for the winner of CGT is anything but.Â  When the contest is all said and done the winner will walk away with $100,000 cash, a Nissan GTR (worth over $100,000), a show on the Las Vegas strip and a spot on the BT NYE show.Â  That is way more than I thought the winner would get, but let’s be honest, the compete DVD collection of You Can Do That On Television seems to be the norm for other reality shows.

Before tonight’s premiere, I was expecting singer/songwriter after singer/songwriter, but instead, we were treated to some amazing acts like the Fantasy Circus‘Â  jaw-dropping balancing act and Angela Ewtushik and her energetic dog Rally. The first episode’s highlight was definitely 22 year old KRNFX.Â  He’s the first ever, undefeated & current 2 time Canadian Beatbox Champion. He’s act was so good that he had the judges up out of their seats dancing and when the audience finally settled down, Moccio made the bold declaration that’s we’d be seeing KRNFX in the finals!

Other acts weren’t so lucky. Oliver Oliver, Grant the Fire guy, The Monsters of Schlock all had polarizing talents that left the judges no other choice but to send all three performers packing after getting three Xs.

As with its American predecessor, CGT finished up the first episode with a heartwarming story about an immigrant who left her family behind, to escape the Chinese government.Â  Now that her family has finally joined her in Canada, Aygul Memet is free to show off her amazing talent, which left the audience and judges in awe.Â  Her act also provided us with the nights’s biggest laugh, when Measha asked Memet what was the name of her “art form” and she responded, “uhh hula hoop.”Â  Nothing wrong being culturally sensitive Measha.

As the show continues to develop further into its inaugural season, I hope that producers are willing to work out some of the kinks, which were mostly obvious with the show’s edits, which made it look like the judges were changing outfits back and forth between acts, when really producers were mixing together a few different days of judging.Â  The show’s soundtrack also needs to find a better balance of music, that should feature way more Canadian music than it does.Â  It’s hard to take their search for Canada’s most talented performer when were listening to an Enrique Iglesias and Coldplay. Don’t tell anyone that I said this, but I might even be okay if they played some Nickelback every now and then.Â  Lastly, the never-ending background noise of cheering, even when it was very clear that the audience wasn’t even clapping, needs to be tight, but overall, production was very comparable, which is a fantastic thing.

It’s hard to tell after just one episode, but I’m thinking that so far Canada’s Got Talent is well on it’s way to being a huge show, the cast is great, the talent is fun and the season is just getting started.

What did you think?Â  Did you watch, will you come back?