Presented in partnership with Travel AlbertaÂ

When the heat of the summer gets intense, or the crowds of tourists have you seeking a more peaceful retreat, look no further than Elk Island National Park. “Where?” you ask. Elk Island National Park is actually only about 30 minutes east of Edmonton. The quick shift of urban to nature is almost jarring, but it in a good way. Edmontonians are definitely lucky to be able to be able to be surrounded by thick forests, unforgettable landscapes and stunning lakes in a matter of minutes after leaving their downtown. 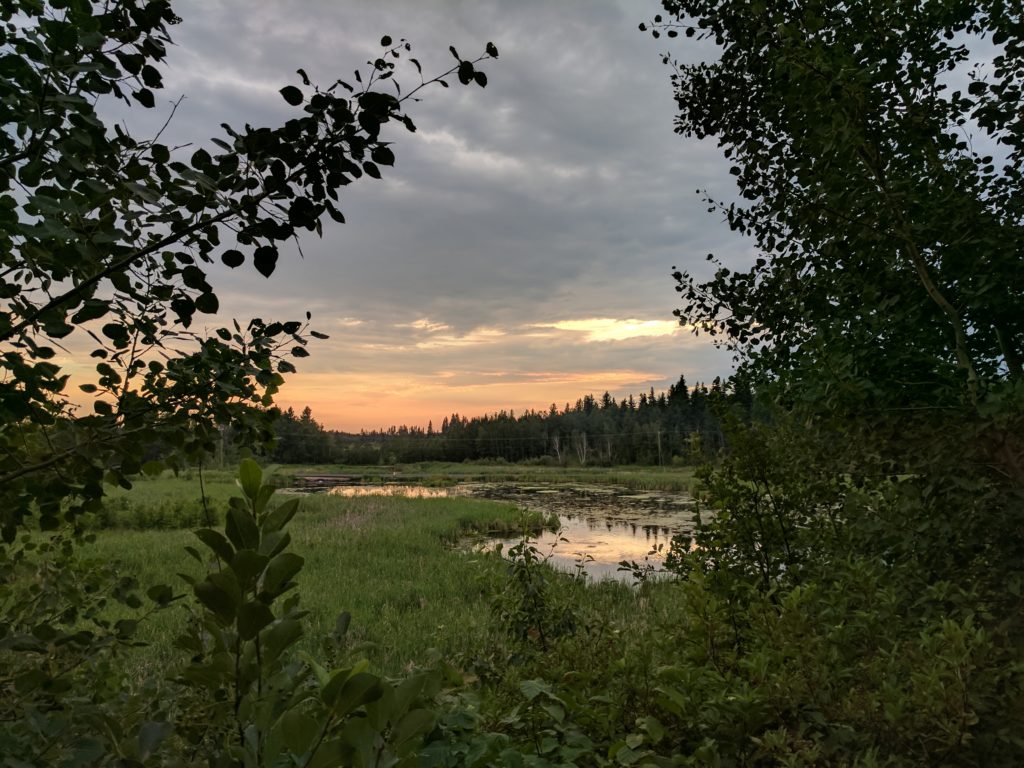 For this particular trip, we decided to book an oTENTiks. These are the comfort camping tents popping up in national parks across the country.

I’ve camped using the yurts at Pigeon Lake and loved the experience. But this was my first time booking with Parks Canada’s oTENTiks, so I was excited to try it out. First things first, you need to book them early. The reservation system opened up back in January and we booked ours for July the second we had access to it. So it definitely involves a lot of planning, but in the same breath, it gives you a fun and warm weekend to look forward to when you’re trying to make it through a cold winter. 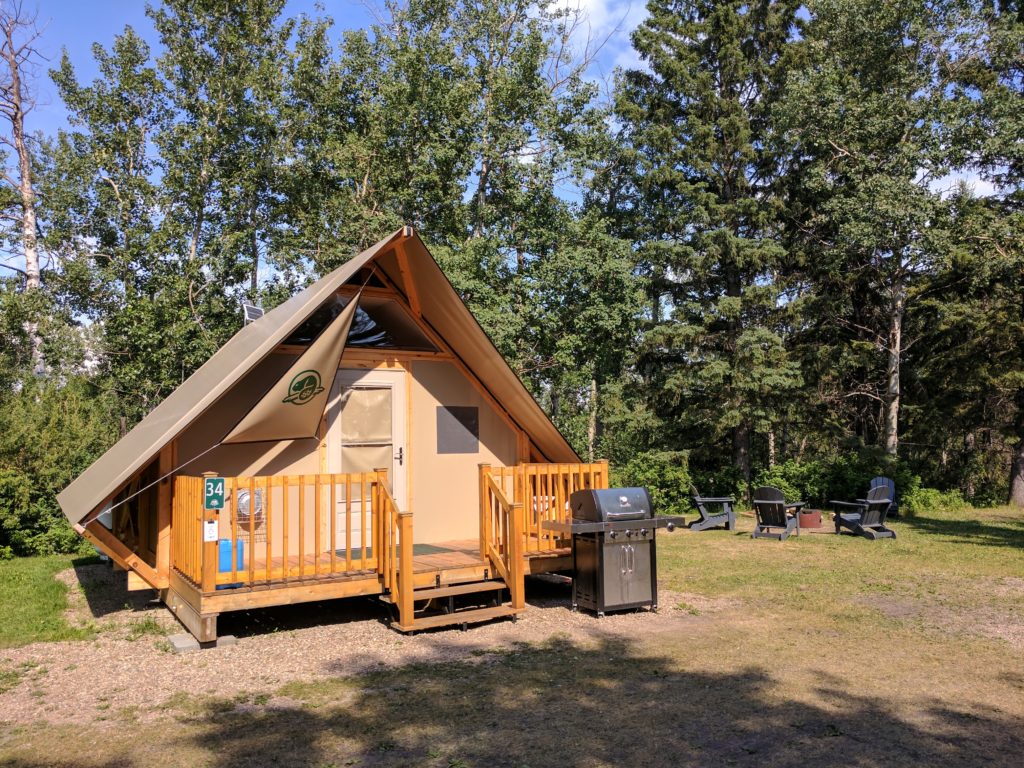 For years I’ve defended the idea of “comfort camping” to my friends who are die-hard campers who say that it’s not real camping. Maybe not, but it does make camping accessible to a whole new group of people, and that includes people like us, who aren’t even sure if we evenÂ like camping. So the oTENTiks give us a way of dipping our toes in the water, without having to fully commit. But since the tents sleep six, the oTentiks are also great for bigger families, and perhaps make it easier to camp with grandma and grandpa. Â Then there’s the cost. If you were to say you wanted to try camping, you’d have to buy a whole lot of equipment all at once, that’s quite the expense. Not to mention, you’re not even sure if you like camping in the first place. Â I think there’s actually a ton of great reasons to try oTENTiks. 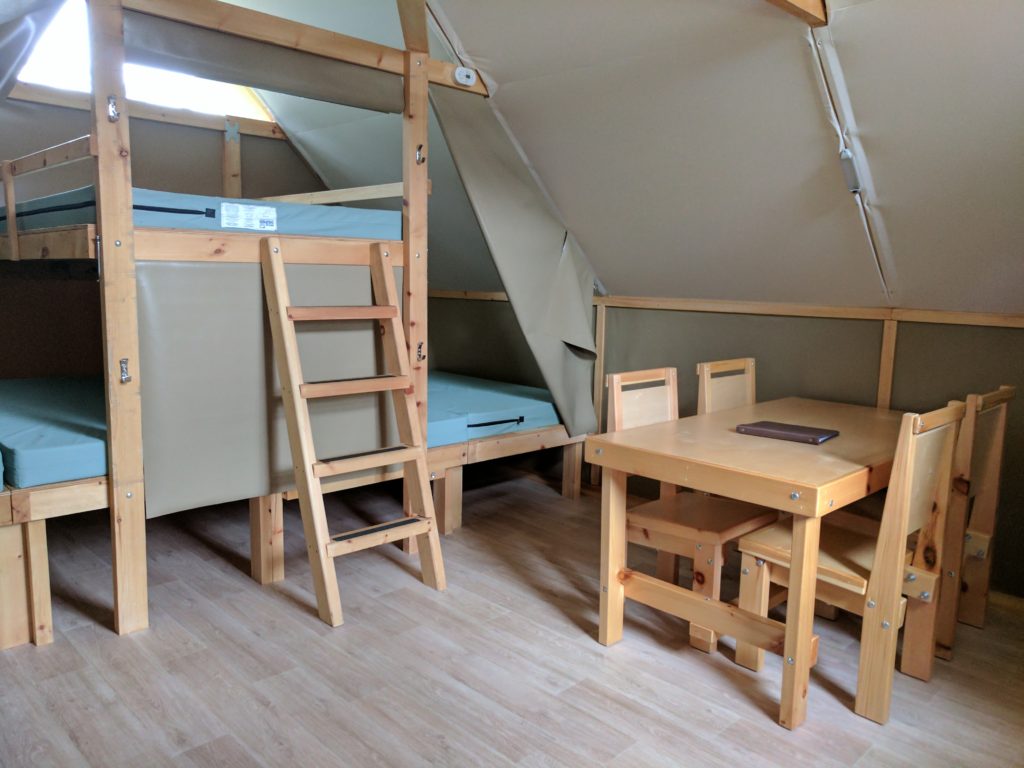 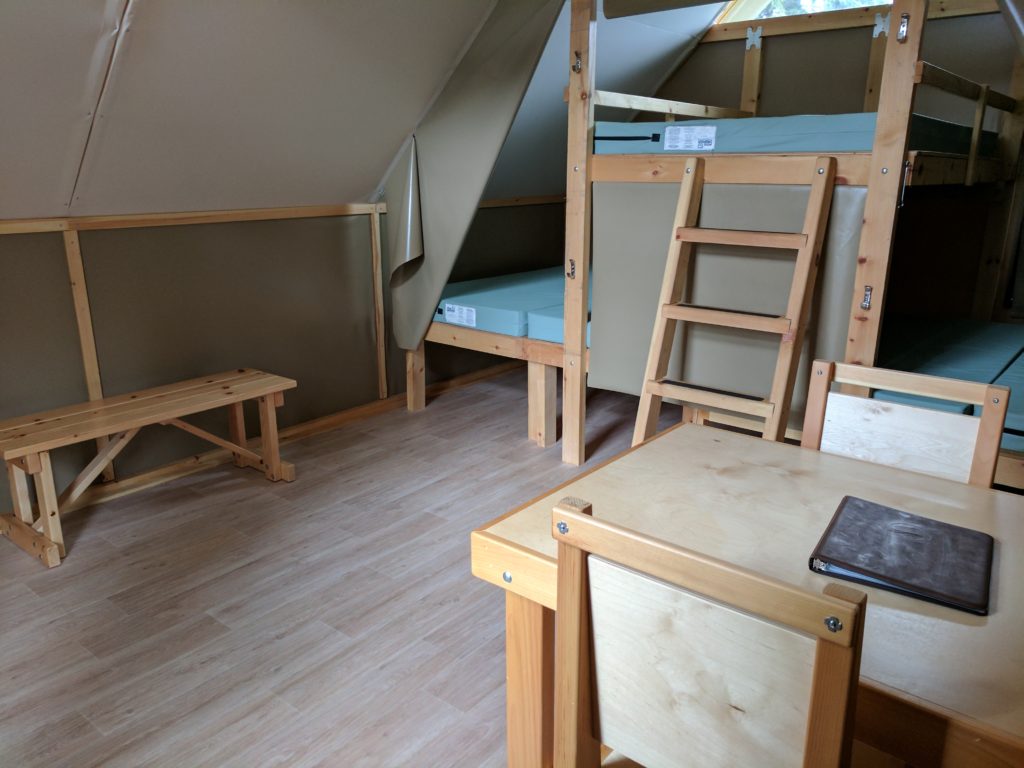 Inside the tent, you’ll find one double bed, two singles, and a bunk bed, but really it’s just one big bed. So like real camping, you’ll get cozy with whoever you’re sharing the tent with. There’s also a table and chairs, which is so helpful when it’s time to go inside, but you don’t feel like going to bed yet, which the electric light and a battery-powered lantern, will make easier. Alberta nights get chilly, even on the hottest days, so there’s also an electric baseboard heater, and most importantly a USB charging port! Because while I’d like to think I could go camping without charging my phone, it’s not just possible.

But the oTENTiks are no hotel room. You still need to bring all the camping equipment you’ll need to make your meals, although the propane BBQ does make that easier. There’s also no plumbing or running water in the tents, which means you’ll still have to shower and use the bathroom with the rest of the campers, which is always interesting. So the things you love about camping, like being outdoors, roasting marshmallows and spending quality time with your friends and family are still there, it’s just a little more comfortable. Hence the name.

And since you’ll be waking up dry and having had a great nights sleep, you’ll feel energized to explore Elk Island National Park, and you’ll need that sleep to see all the great sites! 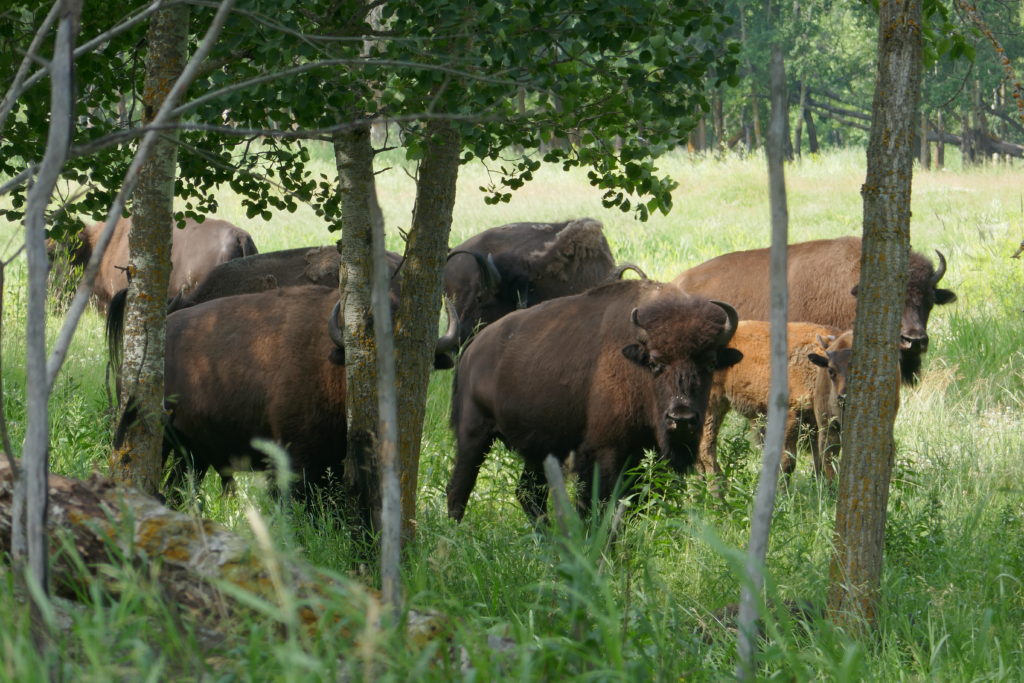 The main attraction of the national park are of course the bison. There are over 800 of them scattered across the park, and can usually be spotted near the entry of the park, although not guaranteed. It took us three different attempts to see them, but were so happy when we did. They really are so beautiful. 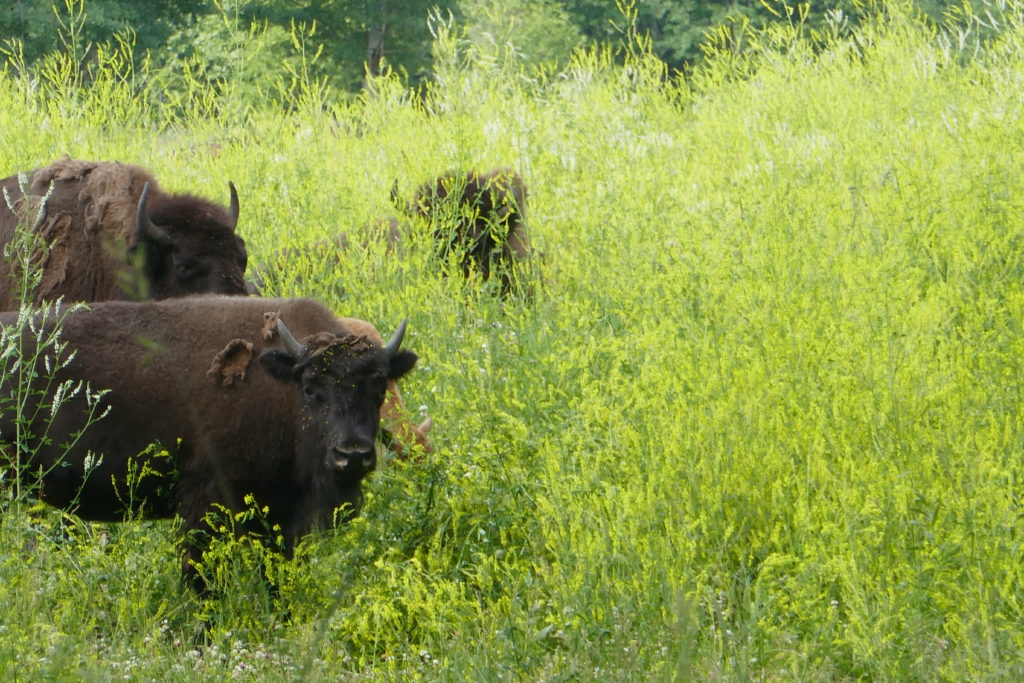 We didn’t do it this time around, but the park offers bison backstage tour, which gives you a tour of the labyrinth of corrals, catwalks, alleys and gates, demonstrating the techniques behind the successful conservation program that conservation facilities around the world rely on to restock herds. Thanks to the program, thousands of bison have been re-distributed around the world. The annual Bison FestivalÂ takes place on August 19th, featuring local chefs offering live culinary demonstrations. Â You’ll also have the chance to hear from the park’s naturalists who work on the bison conversation program. There’s also music, dance and drama presentations throughout the day. 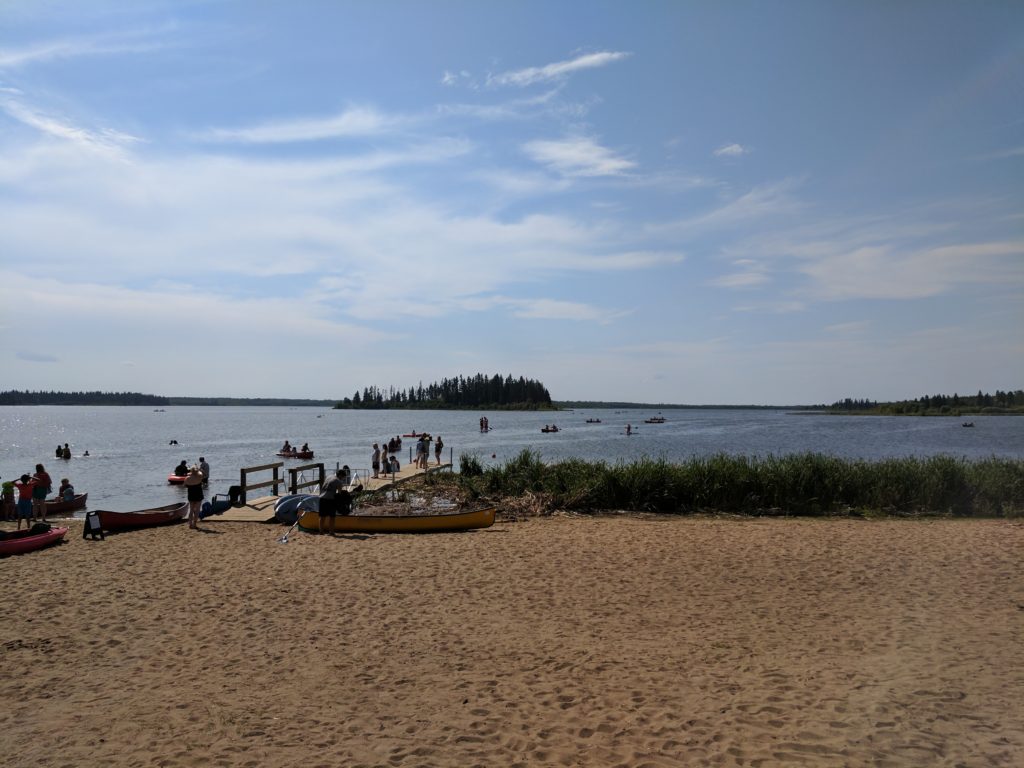 While at the park, it’s pretty much impossible not to exploreÂ Astotin Lake. Â It’s basically the hub of the park, so you’ll not want to miss it. The area is also where you can set up camp….or have camp set up for you. Â  The lake itself features a beach where you can rent canoes and kayaks and take to the water and explore the lake’s many islands. The lake is pretty calm and the day we were there, it seemed many people were learning how to canoe for the first time, so it’s definitely novice friendly. 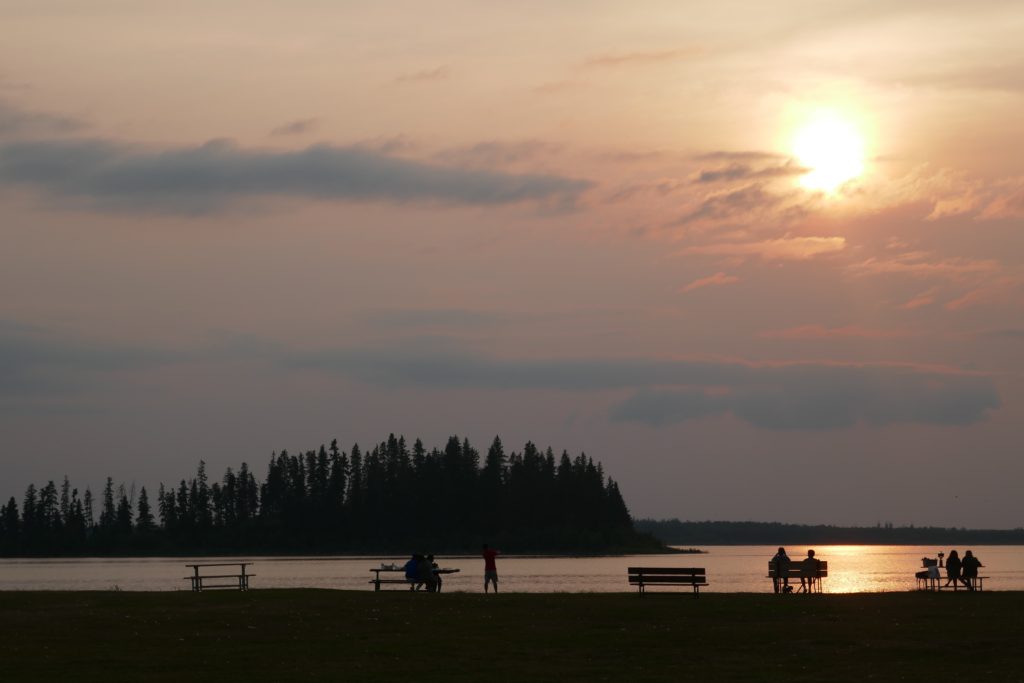 The lake also has a beautiful boardwalks that weaves along the shores. Â I think it may be my favourite spot in the park to watch the sunset, especially with the many different animals that call the lake home. Â Listening to theÂ symphony of birds makesÂ shooing away the mosquitos worth it! The park is actually also a part of the Beaver Hills Dark Sky Preserve, so once the sun sets, wait around and wait for the for the star show to begin. Thanks to the clouds and a full moon, we didn’t have much luck watching the stars, but if you do, I’m sure you’ll be left in awe at the magic of a dark sky preserve. 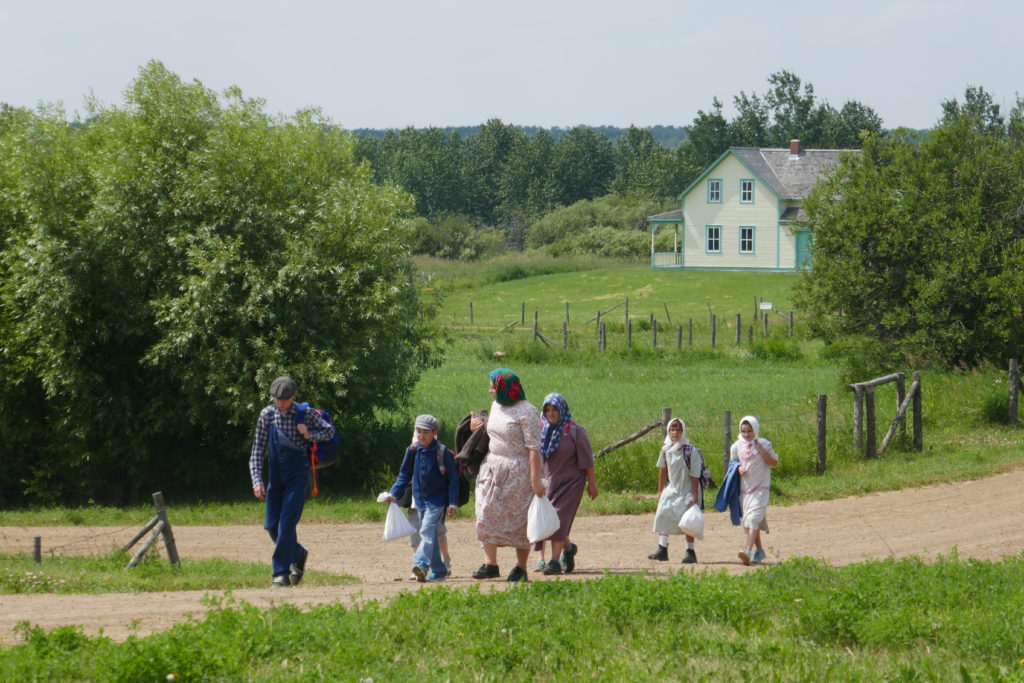 Outside of the park, there’s also a ton of interesting things to do, like the Ukrainian Cultural Heritage Village,Â an open-air museum depicting the pioneer life of east central Alberta’s early UkrainianÂ pioneers that settled in east central Alberta from 1892-1930. Â The museum is only a five minute drive from the park and features more than 30 buildings that have been restored and gathered together. Â The site isn’t where the village was originally, but it gives you a sense of what life would have been like for them. 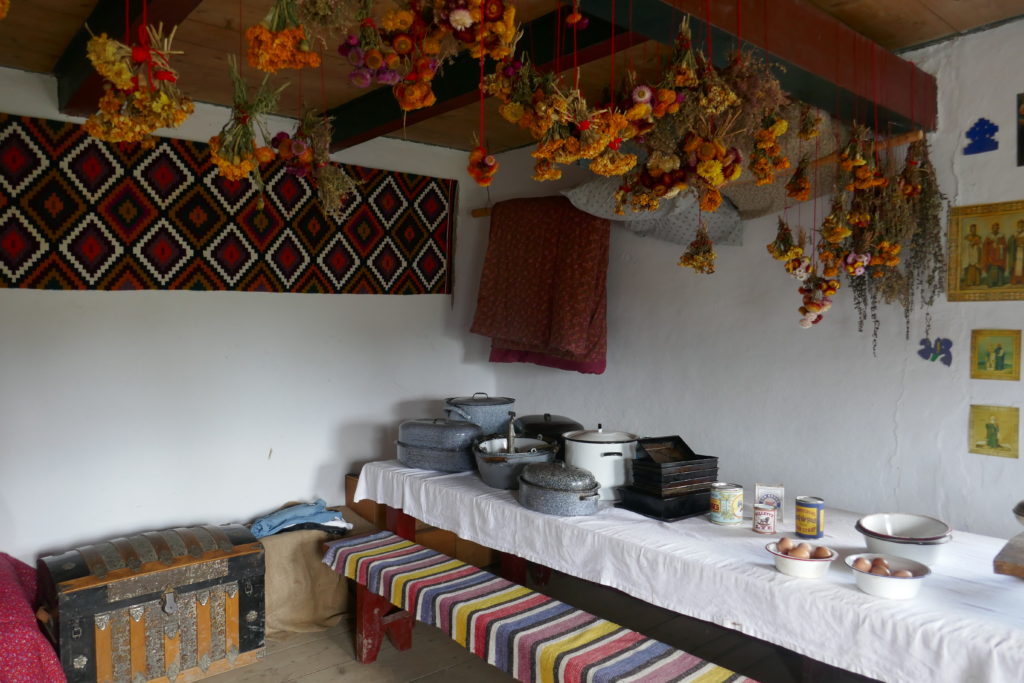 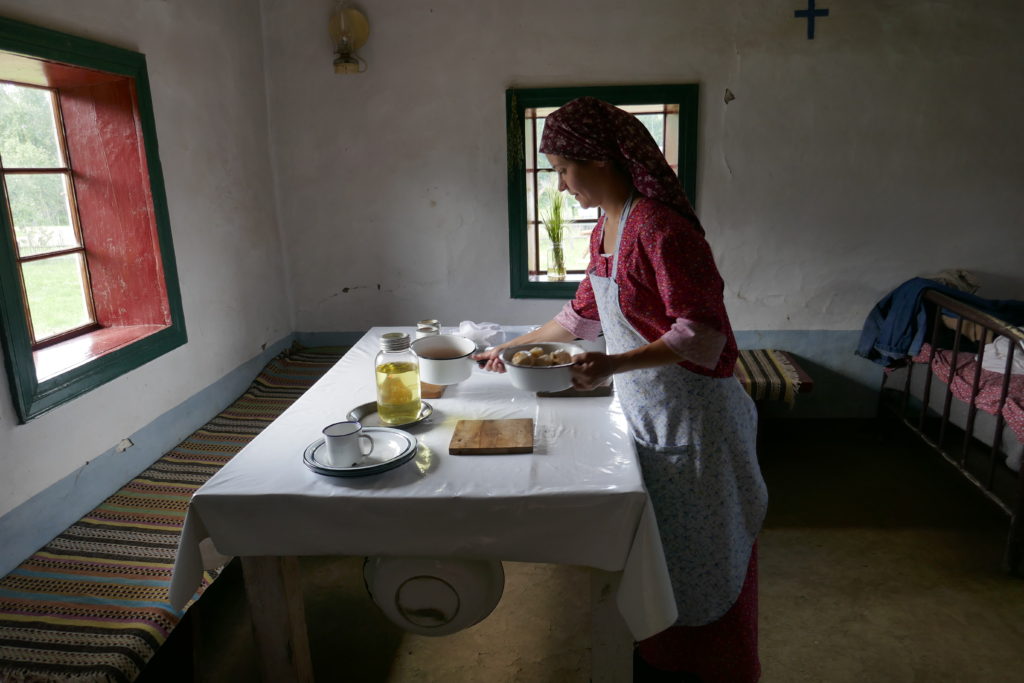 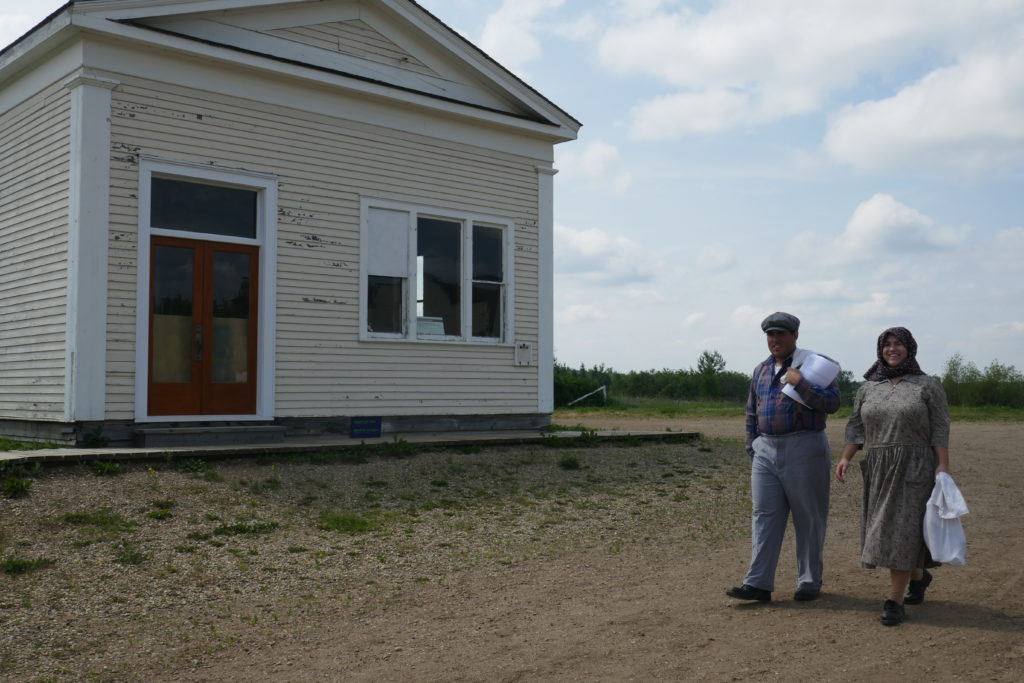 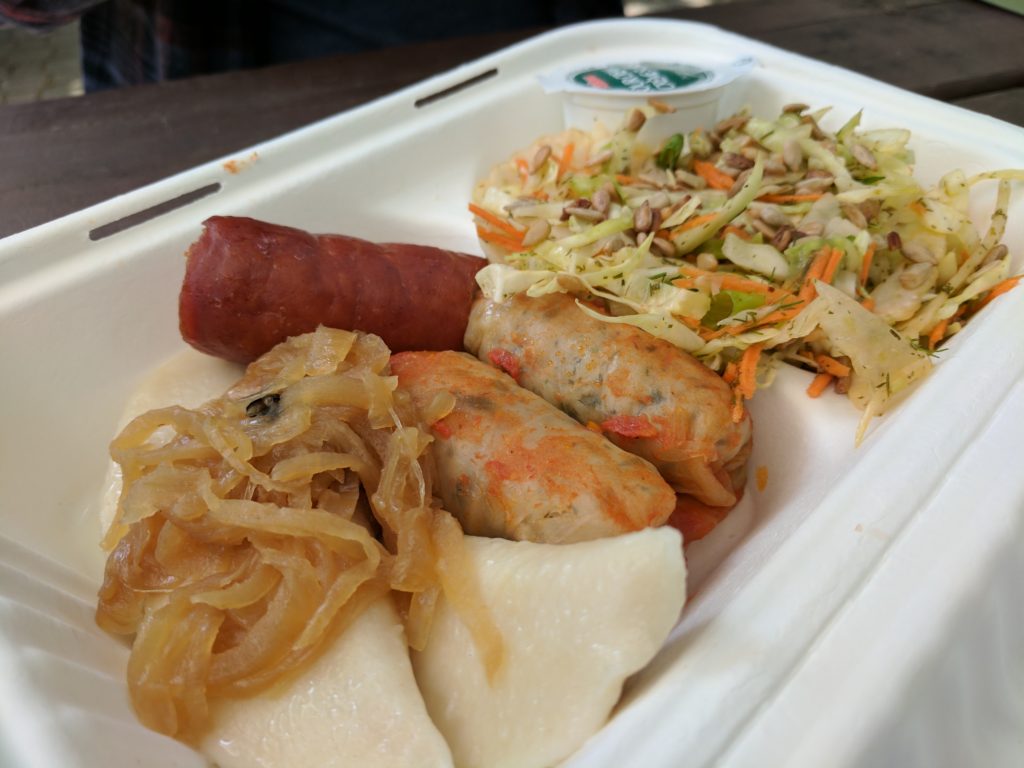 One of the most fun things about the museum is that everyone you interact with is in character and will share with you their stories and even ask you to help with some of their tasks. Â It’s sorta like the Sims…if you needed a modern reference. Alberta’s Ukrainian history in the province is incredibly important, so it was neat to learn about it. Be sure to try some perogies at their restaurant, because “when in Rome”, or Ukraine in this instance. 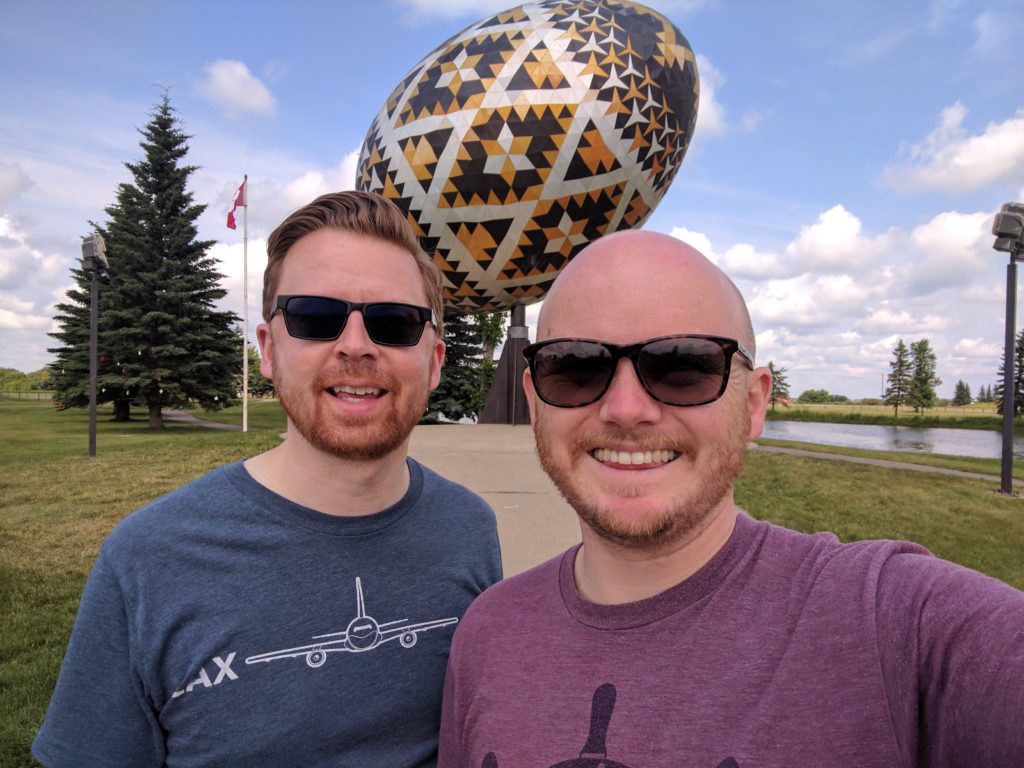 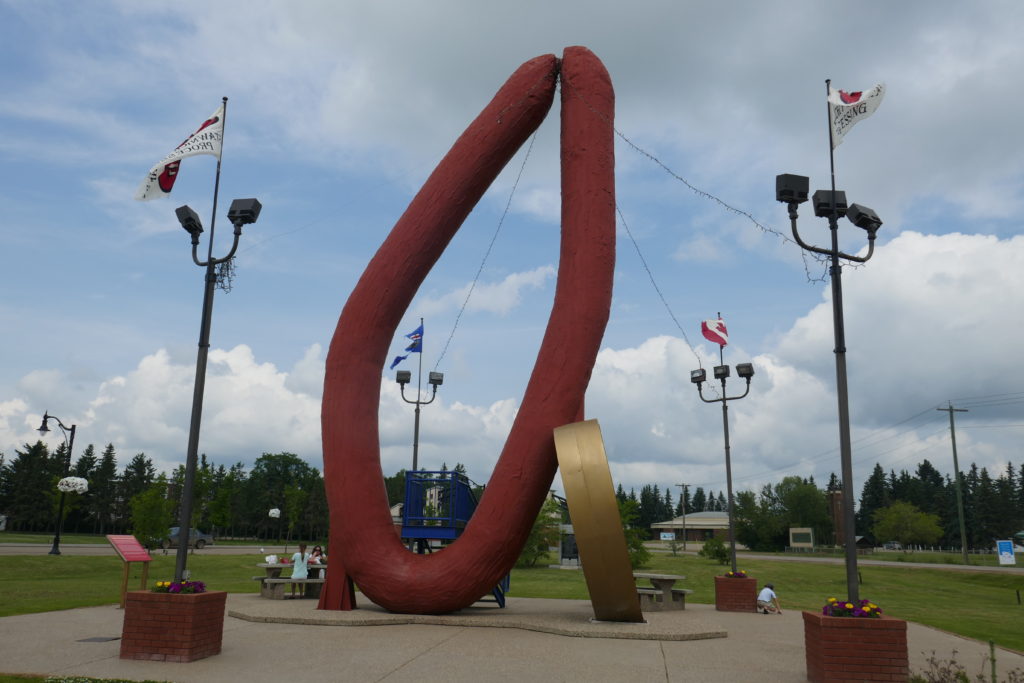 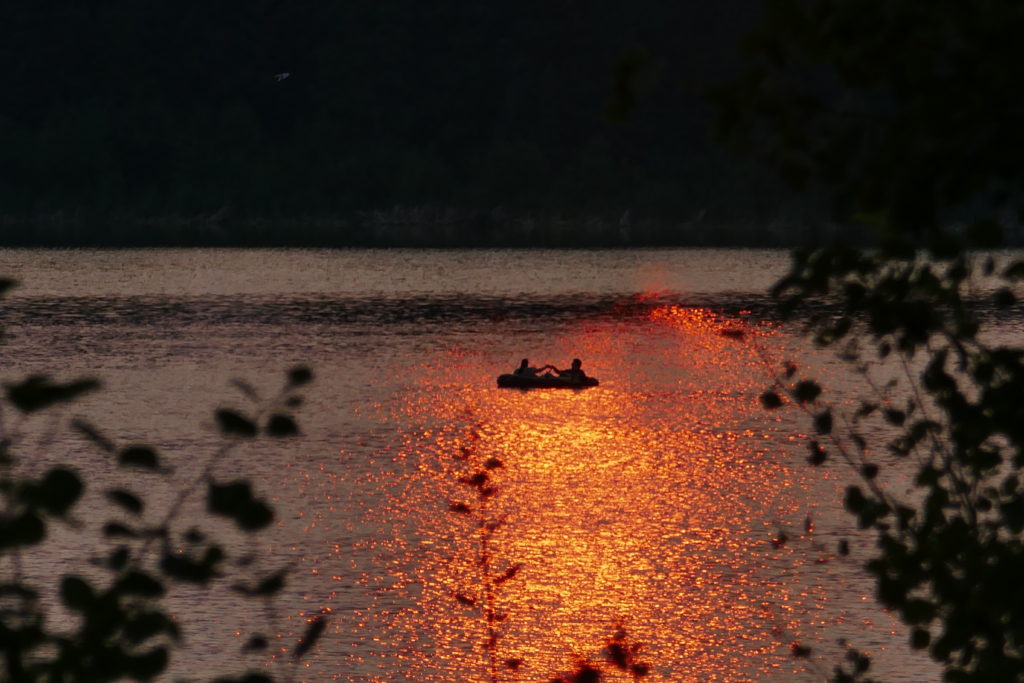 This particular trip came at the end of a hecticÂ few weeks, so in a way it was perfectly timed. Because there’s no better way for me to come down than spending a few days connecting with nature and history. And the area in and around Elk Island National Park was definitely that. Â From finding comfort in camping, to come face to face with the beauty of the park’s bison and all the rich history surrounding the park, this was a perfect place to get away from it all, and still feel like still feel like I was home in Alberta.