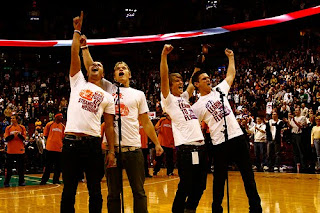 You can fault MTV all you want for their choice of programming. Are shows like The Hills or Jersey Shores making today’s youth better people? Probably not. But they are keeping tanning salons open, so that is pretty cool.

But every now and then, shows like The Buried Life get made and I get a renewed faith in MTV. If you haven’t heard about this show, it premieres tonight and it follows four Canadians with a list of 100 things they want to do before they die.
Some of the things are their list are easier than others:
3. Get a tattoo.
9. Destroy a computer.
27. Give a stranger $100 bill.
Others might prove to be a bit difficult:
15. Get on the cover of Rolling Stone.
26. Tell a judge: “You want the truth? You can’t handle the truth!”
55. Kiss Rachel McAdams.
What makes me really excited about this show is that the attention it is getting in the States. Unlike Peak Season, The Buried Life will be airing in the United States as well, this means HUGE exposure for our Canadian boys Duncan, Ben, Dave and Jonnie.
How much exposure?
How about a billboard in Times Square. 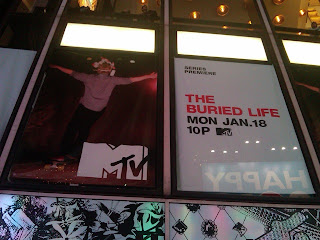 The internet has been abuzz about everyone starting their own lists, so I thought I would make one too. I’ll have to put more time into it, but for now here are five things I want to do before I die.
1. Cut someone’s combover while they are sleeping.
2. Be in a comedy sketch with Sheena and Daryn from MTV Live. (Comedy Sketch can also be replaced with “Be made fun of by…“
3. Climb Machu Picchu.
4. Learn to sail a boat all by myself.
5. Adopt a rescue-dog.
So what about you? What is on your list?
Also, know one with a really bad combover. My time is precious, I want to get started on this list ASAP.
The Buried Life premieres tonight on MTV Canada.
mtv canada