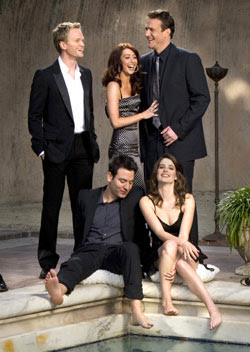 I have been waiting for this monday for almost 4 months. Yes it has been that long since we last saw our dear friends at Heroes and How I Met Your Mother. That is why I thought a little recap would be in order.

First up? How I Met Your Mother, or HIMYM. I know, I know, you’ve never even seen this show why do you even need a recap? Because you NEED to be watching this show. It has something for every one. Mostly it has Barney (Neil Patrick Harris). Harris got an emmy nomination for his portrayal of the womanizer who refuses to settle down while everyone else around him has either gotten married (Marshall and Lilly) or looking for the love of their live. Which brings up to Ted, he who is looking for the titular “mother” who becomes his wife of which he has been telling the story to his anxiously awaiting now grown kids. While it is not as consistantly funny as friends was, I think they definitely tell better stories, they especially get points for the unique time travelling form of the stories which is filled with flashbacks and flash forwards.
Last we saw Ted he officially ended his doomed relationship with news reporter. I say doomed because we’ve known since the 2nd episode that to Ted’s kids she is known as Aunt Robin, thus ruling her out as the mom. But inevitably the two dated but in the final moments of the season finale it was decided that they would go their separate paths. Now newly single Ted and Robin welcome guest stars Enrique Iglesias and Mandy Moore to get them out of them gloomy post-breakup state. HIMYM and Mandy Moore? Legendary. 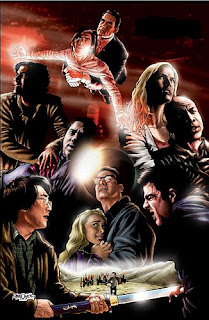 Which brings us to Heroes. Last we saw our super heroes in training the Petrelli brothers had supposedly blown up in space, Matt and were fighting for their lives, Sylar had slinked into the sewers, Claire wasn’t wearing her cheer leading outfit and time traveling Hiro found himself in 16th Century China. So in the second season premiere expect a lot of answers with probably even more questions. Our lovely Veronica Mars….I mean Kristen Bell doesn’t make her first appearance until episode 5, but I have no doubt the writers will give us lots to think about until she shows up to stir the pot.

At some point during the night I’ll also be checking out NBC’s new show Chuck. It airs before Heroes but at the same time as HIMYM so I will using my TIVO to make sure I don’t miss a moment of it. This weekend I cleared out my TIVO and there are only 3 things left on it. The last two Veronica Mars and my national television debut. As you can imagine, I had a very productive weekend.