How about that, we now live in world it’s cool to say that you’re a geek. Â It wasn’t that long ago that geek was a typical school yard insult, but now, many people wear the label like badge of honour. Don’t believe me? Â Then you should check out this month’s Calgary Expo, which has quickly grown into Canada’s second largest collection of geeks. In fact, besides the Calgary Stampede itself, the Calgary Expo is the biggest event on the grounds.

Actor, producer, writer and YouTuber Felicia Day could quite easily be considered the Queen of The Geeks, which probably comes as a surprise to the mild mannered ginger (aren’t they all), who you may have seen on shows like Buffy, Supernatural and The Guild. But it’s online where Day’s kingdom is most prominent. With more than 2.25 million passionate fans on Twitter, the entrepreneur is as influential as she is endearing.

At this year’s Calgary Expo, Day will undoubtedly garner one of the biggest fan reactions, which is why I was excited to talk to her about her return trip to Calgary. Â With so much on the go, I wanted to know how she decided what to keep private, how she prioritized and if and when, we’ll see Dr Horrible 2!

Do you have more fun at expos and conventions as a guest or as a fan?
Felicia Day: As a guest I spend a lot of time meeting fans, which is really fun, because I do mostly internet content, so all I get to see is what my fans typed. So to put a face to the username makes it all much more worth it. Thatâ€™s really fun for me. When Iâ€™m a guest, I always take a few hours to walk around the convention because every single convention has their own vendors and I love seeing the diversity of creativity wherever I go.

Fans at expos and convention are known to stand in long lines to meet celebrities. Who would you stand in a long line for?
Felicia Day: â€¨Iâ€™m a huge fun of Simon Pegg, Edgar Wright and that whole group of british comedians. I really love The IT Crowd, those kinds of shows. And I also really love authors. When I meet authors, I sometimes get more excited to meet them than I do when I meet TV or movie stars. I think the person I fan-ed out the most over was Star Trekâ€™s Patrick Stewart. When I met him backstage at a convention, I literally lost my mind. I think I babbled for five minutes and then became very quiet because I had embarrassed myself.

â€¨â€¨But people must act like that around you sometimes. Is it surreal?
Felicia Day: â€¨Itâ€™s very flattering and I try to make people feel comfortable and make sure that the limited time that we can talk is something that they can look back on, without the embarrassment that I had when I met Patrick Stewart. Making people see that the multi-dimensions of yourself as an entertainer and performer and also the relatability of it. Weâ€™re all just people doing jobs and they just happen to be a little bit different.

Your online profile has made you life up for public consumption. How do you decide what to keep private?
Felicia Day: â€¨Iâ€™m very careful about keeping my very personal life not public. I have a parameter that I have to have, because being on the internet, people will sometimes go too far. Iâ€™m actually a very introverted person and itâ€™s strange to me that the things that I love have gotten me so far, because they werenâ€™t exactly popular when I was just doing them as a fan, like comics, writing and playing video games. Itâ€™s a weird but wonderful thing.

Youâ€™ve made your success by working in what can be described as the â€œcultâ€ genre. Is that by your choosing?â€¨
Felicia Day:I just pursue the things that I find fulfilling and those things just happen to be outside the box because the things that I loved werenâ€™t exactly mainstream acceptable. The kind of person that I am isnâ€™t going to be the kind of person that every single person in the world is going to love, I think thatâ€™s the beauty of the world we live in now. People who have strong voices and points of views can have careers without being watered down or being able to please everyone. And that just helps other people be themselves, without judgement. I think thatâ€™s the definition of the whole world of geekdom. Itâ€™s evolved to unapologetically loving what you love. Even though Iâ€™m not on a mainstream show, every single day someone will say something nice to me and thatâ€™s pretty exciting.

â€¨â€¨Youâ€™re a writer, actor and you make videos online, among a ton of other things, how do you manage your priorities?
Felicia Day: â€¨Itâ€™s pretty hard to manage my priorities when I do a little bit of everything. I run a business, I produce all the content on my show, I act, I try to get time for writing, plus on top of that, a lot of people ask me to do things. It takes constant monitoring to make sure that Iâ€™m thinking of all things long term and that Iâ€™m doing things for the right reasons. I really love investing my time in the long term projects and something you can get lost in the minutia and lose focus. I have great people that work with me at Geek & Sundry. This year, Iâ€™m very careful so I can get back to enjoying watching a movie, playing video games or writing. Itâ€™s about having a really good time and not being on Twitter all the time. 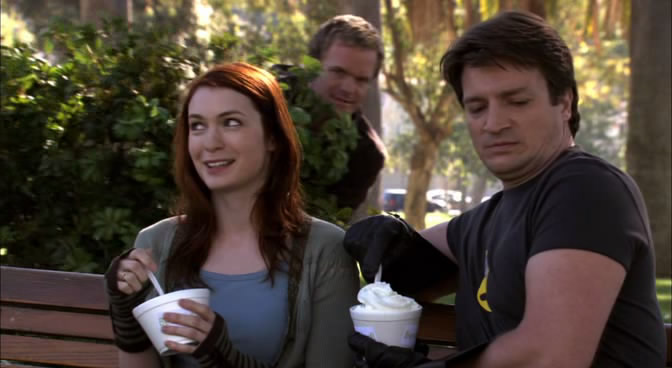 â€¨â€¨Perhaps your most mainstream project was the web-series Dr. Horribleâ€™s Sing Along Blog. Now, (spoiler alert), it would be difficult for your character to come back, but if she did, how would you like to see it done?
Felicia Day: I wouldnâ€™t want to impose my vision on something that someone else is going to write. Iâ€™m so excited that theyâ€™re talking about a sequel and that there are ideas in their back pocket, but I think theyâ€™re a little busy with the Marvel universe right now, so I donâ€™t know when theyâ€™d get around to it, but if I were to be involved, it would be an amazing blessing, but if not, Iâ€™d be just as big of a fan as anybody else.

Youâ€™ve worked with Joss Whedon a lot. Do you think youâ€™ll ever appear in one of his Avengers movies?
Felicia Day: â€¨I like to stay out of the mainstream, I suspect thatâ€™s where I do my best work. I wouldnâ€™t bet on it, but I certainly wouldnâ€™t turn down the opportunity. I love doing things outside of the box, the hard way. The cool thing is that my fans support that and they love what I do.

More and more people are becoming official geeks, but for those new to the genre, can you share with us some of your favourite channels?

Felicia Day:Â â€¨Thereâ€™s this guy named Robbaz, I think he is the funniest person on YouTube. Heâ€™s from Sweden and heâ€™s got the craziest voice. Heâ€™s not the most popular person on YouTube, but for my vote heâ€™s the most amazing of the game players. Itâ€™s my guilty pleasure lately.

Whatâ€™s your favourite Twitter account to follow?
â€¨AncientHistory every single time I see one of those tweets go by, I learn something about the world that I didnâ€™t know about.

Do you remember your ICQ number:â€¨
Felicia Day:Â I donâ€™t, but I remember it was a lot of numbers. I never knew what my number way, I just always stayed logged in so I never hard to remember it.

Any last words before your trip to Calgary?
Felicia Day: Â Iâ€™m looking forward to coming back to Calgary. I have to go to Jelly Modern Doughnuts, because honestly itâ€™s the best doughnut Iâ€™ve ever had. The peanut butter one, was AMAZING. And I canâ€™t wait to have a steak, you guys have great steak.

Felicia Day will be attending this year’s Calgary Expo. Visit their website for the entire line up and hurry, tickets always sell out.Â