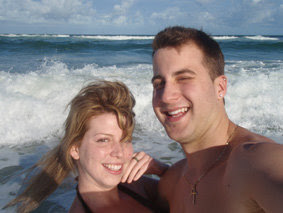 Turns out Facebook isn’t just for playing Farmville and making your former classmates feel crappy about their lives anymore.

I just read this awesome story and wanted to share it you guys!
Back in October 2009, David Castellan found a camera washed up on the shores of a Queenland beach in Australia. The camera, which was covered in barnacles, was destroyed, but the memory card in the camera still worked and contained a lot of pictures of a some happy couple.
Deciding to play Veronica Mars, Castellan created a Facebook group to discover who this couple was and hopefully return the pictures. He called the group Do You Know This Couple and proceeded to post pictures to help his search.
By analyzing the pictures he was able to determine the couple was Canadians, because they were drinking Canadian beer. He figured out that they lived in Ontario because some pictures of the Mackinac Bridge in Michigan. Then he used the guesses of the people that joined the group to eventually find the couple!!! Their names are Heather Irvine and Graham Lorenzo and they are more surprised than anyone to get their pictures back!
It turns out the camera had been in the ocean for NINE months. Now, I don’t know what kind of camera it was, but that company needs to market this story ASAP
So while all my friends are finding golden bunnies or lonely horses on Farmville, it’s good to see that people are finding much cooler things on Facebook!