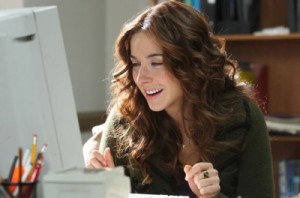 It is not secret that Being Erica finished its second season with the mother of all cliffhangers….would it come back for a third season. Â Luckily CBC did the right thing and renewed the most buzzed about show in Canada. Â Sure the ratings have never been through the roof, but the show is good and has lots of story to tell. Â Me and all of Being Erica’s fans were relieved that CBC felt the same way.

A couple of week ago, I got the chance to visit the set and chat with Being Erica’s star Erin Karpluk. Â It was during this interview that Erin spilled a lot of secrets about the upcoming third season. Â Check out what Erin has to say about returning characters, this season’s big changes and why she doesn’t want Erica to have a happy ending!

So many people wanted Being Erica to be renewed for a third season, but it wasnâ€™t a sure thing. What were your thoughts leading into this season?
You know what, I was hopelessly optimistic. Based on things that you here through the grapevine. But I always have a little safety-guard on myself from previous experiences. And I like to be a realist and prepare for the worst and if it does happen, then Iâ€™m somewhat prepared for it. But obviously it is doing great on CBC and SoapNet and weâ€™ve been picked up by over thirty countries, so we were hoping weâ€™d get another shot at it.

Despite all the buzz, the ratings for Being Erica have never been through the roof. Are there things that we can expect in hopes of brining in bigger ratings?
Honestly we just keep wanting to better and better and better. But this year it feels there is more of masculinity to it. It kinda got â€œman-ed upâ€ a little bit. It just isnâ€™t a show for girls.

How so?
Certainly by the new characters that are introduced. With the last two seasons, the first halves always felt like we were warming up to the second half, but the third season just starts off with a bang! And it is a darker Being Erica. I donâ€™t want to offput people who might think it is a different show, there is still comedy but the writers have gone darker.

Is it harder to play darker?
I prefer to play the comedic beat, but that said, Erica is a really well-rounded character and the highs come with the lows. It is definitely a balance, the darker we go, the lighter we go too and it pushes the envelop more. I think some of this yearâ€™s storylines will shock people, but in a good way, much like in the past. 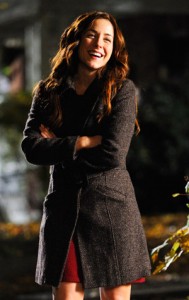 Will there be lots of big changes this year?
Goblins is still around, the coffee is really good. There will be renovations to the shop too. And we get to meet Dave who has a business partner and significant other and it leads to a lot of comedy.

A huge aspect of the show is Ericaâ€™s family. What can we expect from the Strange family this year!
We just finished an episode about Leo. Yup Leo is back! And it isnâ€™t like the first season finale. Iâ€™ve made amends with the death of my brother, there is no way you could tie that into a new show. So we are doing one with Leo and it is a little darker, but it helps Erica answer some questions about her brotherâ€™s struggles in school. It is very intense but I think people will identify with it. And we get a lot more into Barbara Strange and my sister Samantha. But there are some dark things that happen to Ericaâ€™s family that brings us together.

And how about Ericaâ€™s new business with Julianne?
Business is good. They are still struggling to make her way up in the world. But at least she is in a better place then she was.

And what about Brent?
Yup Brent will be back! I love working with Morgan Kelly!

Ethan and Erica have finally broken up, have we seen the last of him?
There will be a whole episode devoted to Ethan! But that doesnâ€™t necessarily mean that he is in it either. And Clare comes back too. There are some pretty cool things that happen between Claire and Erica.

Will Erica find love this season?
I think so. Where just getting to the point in the season where Iâ€™m like: â€œWhere is this going!?!â€ I donâ€™t have the scripts yet, but it is nice to her single because she hasnâ€™t been single for the past two seasons.

Whatâ€™s the fan reaction been like in the States?
I havenâ€™t had as much time down there as I would like. But the ones Iâ€™ve had are very similar to Canada. But what I didnâ€™t realize was that a lot of the show is edited. A lot of the more risquÃ© stuff is chopped out. It is a lot tamer there. The bad words and of course the orgasm in the canoe were all cut out. There is going to be a lot of stuff theyâ€™ll have to edit this year too!

Heaven forbid this is the last season. What do you think will happen to Erica?
I hope it is not happily ever after, because it never is in real life. Iâ€™m not saying that to be pessimistic. But we have highs and lows in life and there is good days and there is bad days and it is what we choose to do with those obstacles that come in our way. I would love to see Erin fall in love and have children. We just a scene where she wonders if she could see children in her life. And I think that is a question that we all ask ourselves. Especially our generation.

Being Erica’s third season premieres September 21st. Â To catch up on the show, picked up the season two DVDs on September 14th.