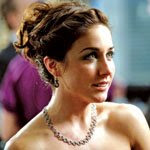 I know I don’t really have to do this because Being Erica Â has already been renewed for a second season on CBC. Â But, I was flipping through my Entertainment Weekly and I stumbled upon a little review for tonight’s Being Erica.

Check out what they had to say:
The single-gal dramedy has an embattled history (RIPÂ Men in TreesandÂ The Ex List)Men in TreesandÂ The Ex List). But this Canadian find rises above it with an existential twist:Â Thirtysomething Erica StrangeÂ (the charming Erin Karpluk) gets a do-over on her most regretful moments thanks to a swarthy guardian-angel type. Tonight, as she ponders her relationship with her male best friend, she goes back to a mid-20s near-lesbian encounter. As always,Â EricaÂ finds insight in what could be clichÃ© territory: It’s not about hot girl-on-girl; it’s about how we decide who’s a friend and who’s more. A â€”Jennifer Armstrong

o, your eyes aren’t mistaken. That is indeed an A rating.
If I legally and literally marry both a TV show and a magazine, you would all be getting a “save the date.” card in the mail. Â I would like to point out that the “lesbian friend” is Anna Silk, who I cannot give enough love to! Â What? Not like you wouldn’t give endless love to a girl from the same hometown as you making it big! Â Go Anna!
Thanks EW!
Being Erica airs tonight on the SoapNet in the states.
Or catch up with full length episode on CBC’s website.