Everyone from Nickelback to The Rankin Family are playing the...

For the last couple of weeks, there’s been rumours of a massive benefit concert for the people of Fort McMurray. And now we’re getting a better look at the pretty impressive lineup!

The concert is called the Fire Aid Concert and will take over Edmontonâ€™s Commonwealth Stadium on June 29th. 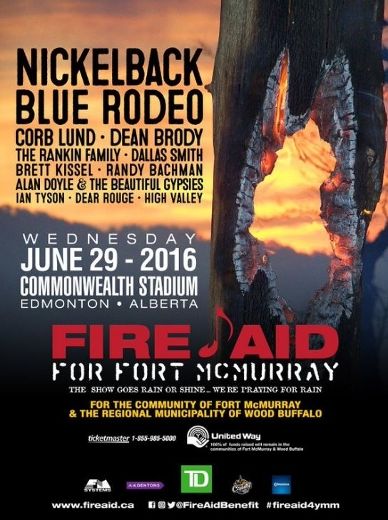 The line up features a slew of some of Canada’s biggest talents including: Nickelback, Blue Rodeo, Corb Lund, Dean Brody, Dallas Smith, Brett Kissel, Randy Bachman with The Sadies, Ian Tyson, Alan Doyle and the Beautiful Gypsies, Dear Rouge, and High Valley. And I wouldn’t be surprised if there were a few surprises.

More importantly, the concert will also feature The Rankin Family, who if you know me at all, is basically my everything. Â Growing up on the East Coast, my mom and I listened to their music all the time and let’s be honest, I still do. Â I can’t believe that they are playing. Â Is it weird that I sorta hope that The Rankins and Nickelback do some sort of collaboration.

And as someone pointed out on Twitter, The Rankin’s rendition of We Rise Again will no doubt be the highlight of the concert. I get chills just thinking about it!

Tickets are on sale now and I actually think the prices are really affordable! Â Tickets will cost $35, $60 and $99 and are available now!Â The concert has room for about 40,000 fans. Â I have to admit, it’ll be interesting to see Nickelback and Rankin Family fans at the same concert, but it’s all for a good cause and that’s all that matters!

So until the big concert, let’s all enjoy the Mull River Shuffle, shall we?