>So just spent three hours watching ER. That is more ER than I’ve watched in the past three years. But I’m a sucker for a good retrospective. It always makes me wish I had my own retrospective. Also why does everyone always look better/happier in black and white in slo-mo? From this day forward, I will only try to see the world in black and white slo-mo. It should make driving interesting.

I also feel bad for the people that the looking back special left out. Mainly Kelli Martin (unless showing her corpse counts), Gloria Reuben, Eric Pallindino and Ming Na. Dang what the hell did you do to the producers? They even featured Jorja Fox, who the hell even remembers that Jorja Fox was on ER?!?

And lastly, I realized that out of all the cast members of ER, I’m going to miss one the most: 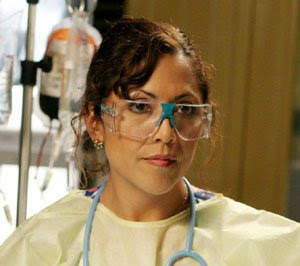 Nurse Chuny Marquez (Laura Ceron) has been on 218 episodes (since 1995). And it wasn’t until the series finale that she is the glue that held the show together. You will be greatly missed Chuny. Up next for Laura Ceron? Well it’s Bring It On 5, obviously.