Epic Rock: Hey Rosetta! at The Legion in Calgary 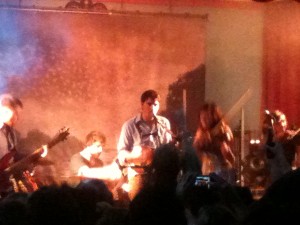 I have liked all of their albums, most notably their latest offering â€œSeedsâ€ which was released just a couple of weeks ago. When Hey Rosetta! took to the stage on Thursday night in Calgary, in front of a capacity crowd at the Legion everyone erupted in cheers and applause at the mere appearance of the band. As they quickly dove into energetic offerings from â€œSeedsâ€ the crowd (who had been kept waiting for some time) clapped and sang every word as the band burst into material never before played in front of a Calgary audience.

This is not your average four-piece rock band. Hey Rosetta! comes complete with two violins and a cello to round out the robust seven-piece sound , almost every member of the band is a multi-instrumentalist with Tim Baker effortlessly transitioning between guitar and piano in the same song.

It is not overstating things to say that I would challenge you to find a better band touring in Canada right now. Hey Rosetta! is a tour de force in Canadian music, on CBCâ€™s Q with Jian Ghomeshi Hey Rosetta! were compared to no less than Coldplay and U2 as well as Canadian superstars Arcade Fire, I would argue that they deserve those comparisons as well as audiences as large as those bands regularly draw.

Check out the Video for â€œYer Springâ€ from Seeds here, with special mention to my friend Sarah Mackey who is the lead cat at the 1 minute 55 second mark of this amazing video which showcases my hometown of St. Johnâ€™s Newfoundland as much as it showcases the spellbinding music of Hey Rosetta!

If you are going to buy one Canadian album this year let it be Seeds by Hey Rosetta!, I guarantee that you will not be disappointed.

Dan Meades always gets pop culture trivia questions wrong; he finds himself politely laughing along when others make jokes about TV Celebs and it took him months to realize that Brangelina is actually two separate people. In fact he had to lie through his teeth just to get Bloggity to let him write music reviews. Some of the lies he told were that he was born and raised in St. Johnâ€™s Newfoundland and made a living as a George St. Musician through University. In fact Dan is almost completely tone deaf which makes it all the more remarkable that he can review concerts at all. You can reach Dan at danmeades@gmail.com