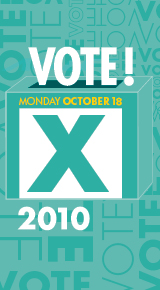 For all non-Calgary Mikeâ€™s Bloggity Blog readers, youâ€™ll have to excuse todayâ€™s posts. They are going to mostly be about our shockingly (and Amazing Race finale-like) mayoral election that finally takes place today! Â Iâ€™m sure you Torontonians will know all about it, since your election is only a few days away too!

What makes these elections so exciting for me, is that this year Iâ€™m going to be playing a major part of Shaw TVâ€™s election night coverage. Â For the entire three hour show, Iâ€™m going to be reporting live on set about all the social media going-ons throughout the night. Â Iâ€™ll be covering all the tweets, facebook posts and blog rants from all the candidates, as well as what Calgary has to say about the results as they come rolling in.

Truthfully, this is a complete dream come true for me. Â On Sunday night we rehearsed the show for about five hours and I felt like I was

in shock the whole time. The lights, the cameras, the teleprompters and IFDs. Â I even got a sweet-ass outfit from an amazing store in Calgary called Espy, Iâ€™ll show it to you later but the sweater in the below pic is from there too! Â Seriously, I have no idea how I ended up getting to do this. Â I feel so lucky.

Anyway, back to the elections. Â At this point, nobody knows who is going to win. Â It is literally a three-way tie between Ric McIver, Barb Higgins and Naheed Nenshi. Over the weekend, The Calgary Herald officially endorsed McIver while continuing to use the worst picture of Nenshi they could find.Â  In a surprising move, The Calgary Sun said that Nenshi was the guy for the job. Â Sadly, this led to dozens of racist remarks on the paperâ€™s comment section about, which have since been taken down. Meanwhile Barb Higgins spent most of her time defending her controversial interviews on Breakfast Television and X929.

What all of this means is that Monday night is going to be an amazing night of Aaron Sorkin-sized political drama! Â If you canâ€™t watch the show make sure you tweet me @mikesbloggity and let me know what you think about the results!

Most importantly if you are in Calgary, please, please, please go vote. Thanks to social media, you have no excuse to not know anything about the candidates. Donâ€™t be lazy, do your part!