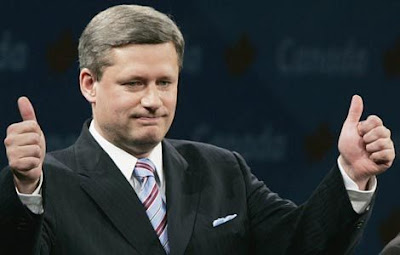 It’s election day in Canada and I’m certainly not going to try to influrence your vote, I just want to give you one quote that Stephen Harper recently said about the Conservative Government’s $45 Million cut specfically to the Arts.

“I think when ordinary working people come home, turn on the TV and see a gala of a bunch of people at, you know, a rich gala all subsidized by taxpayers claiming their subsidies aren’t high enough, when they know those subsidies have actually gone up â€“ I’m not sure that’s something that resonates with ordinary people.”

Um Stephen, the working actors and artists of Canada aren’t the ones enjoying at these galas, those are your corporate sponsers. The actors are the ones serving the drinks and cleaning up the dinners because they are working them.