Phew what a night. Can you believe that Barack Obama actually won!? Wow, what a time to be have cable and to be able to see it live. I tell you folks, things are looking up.

But I still went to bed with so many questions running through my brain.

-So…The Biggest Loser is going to be back next week right?
-What does CNN do with their now infamous magic board?
–Tyra is going to be on forever isn’t?
-How pissed is Lorne Michaels? There goes all his material.
-Will Oprah now have Sarah Palin on her show?
-Anyone else notice that Obama had finished his presidential speech and the polls in Alaska were still open?
-For the first time in my life, I will be TIVOing The View and Oprah on Wednesday. Is that weird? Shit is going to hit the fan and I’m not going to miss a second of it!
-How could the Americans not vote to keep Cloris Leachman? Oh wait…wrong election.
-I miss Arrested Development. Gob’s offensive puppet would have had so much to say about Barack’s big win.
-Can Barack get Knight Rider canceled? Crusoe? What about According to Jim?

Thanks for a great night Megan!

UPDATE: I think this is possibly my favorite picture of the entire election night. It was taken at a celebration in Athen, Greece and I found it on 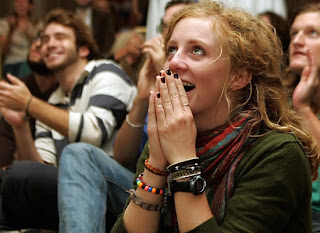