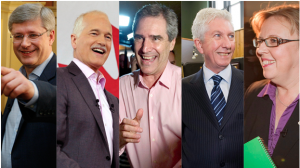 Well today is the day!Â  Millions of Canadians will be heading to the election polls to vote for who they think should run our government.Â  How great!Â  I’m really hoping that you will be one of the lucky Canadians who takes the time to vote.

Here’s a great description of the service: “Vote Compass is an academic project developed by a team of Canadian political scientists, including an advisory panel comprised of the countryâ€™s most prominent scholars in the study of electoral politics.Â Â  Vote Compass is modelled after a similar online application available in Europe, called Kieskompas.Â  Kieskompas founder and director, Professor AndrÃ© Krouwel of the Free University Amsterdam, acted as consultant and quality control monitor to the Vote Compass project.”

I pulled some of the questions, so you can sample the process.

How much should the government be spending on money?

Should Canada seek closer economic relations with the USA?

Canada should adopt a carbon tax?

Should the governmentÂ  fund daycare instead of giving money directly to parents?

How many new immigrants should Canada admit?

If you want to vote, and why wouldn’t you, take about twenty minutes to complete the Vote Compass.Â  You’ll be doing yourself a favour.Â  So please, vote, vote and vote.