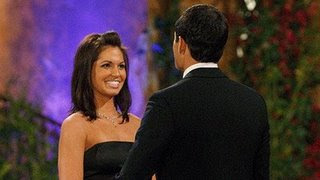 There might finally be a reason for me to watch Dancing with The Stars!

There is a nasty/awesome rumor going around the internet saying that Melissa from the Bachelor has been tapped to replace Nancy O’Dell on the new season of Dancing with The Stars!! Yes, that Melissa!

Since finding this out, I’ve been trying to think if this is a good idea for Melissa or not. I mean how does someone like her, who now has all this crazy attention (no pun intended) around her captilize on it but not come off as a wackjob reality whore?

It makes sense for her to go on a show that has successfully resurrected the careers of everyone from Mario Lopez to Marie Osmond. People love this show, even though it makes me want to rip my soul out, put it in a blender and turn it into a poop-margarita. So why shouldn’t Melissa take advantage of getting some more exposure? And the fact that it is not a dating show is probably the smartest move she could make.

Actually, the smartest move she could make is bowing out of the spotlight completely, but we all know that is never going to happen. At least not for the next 15 minutes….